Months after being thrust into a global pandemic, one thing is certainly clear: our lives have changed. People have lost their jobs, whole industries have been placed on hold indefinitely, and many businesses have shuttered their doors, much like life during the Spanish Flu.

Others, however, are realizing unexplored opportunities for their businesses in this unprecedented time, a phenomenon that also occurred during the Spanish Flu. The MyHeritage research team unearthed some newspaper records from 102 years ago in our treasure trove of 12.7 billion historical records. What did they discover? As the saying goes, “There’s nothing new under the sun.”

Today, online shopping has become the clear alternative to shopping in person. When possible, those quarantining at home are shopping with their computer mouse in a few easy clicks. In 1918, as the Spanish Flu ravaged, businesses encouraged folks to “stay at home, shop by phone”.

A November 1918 ad from The Los Angeles Times recommended that people call in their orders by phone instead of coming to the shops. But telephone services in 1918, just like the internet in 2020, suffered from overload. People were asked to “take responsibility and to use it carefully”. This can be likened to today’s internet overload issues, with many finding themselves confined to their homes. The EU asked Netflix to limit services to protect broadband infrastructure.

An ad for the Bell Telephone Company of Canada from The Ottawa Citizen, on October 15, 1918, called people to use the telephone only when absolutely necessary. These days, millions of people around the world are using TV streaming services such as Netflix for at-home entertainment. In 1918, while people spent more time at home, there was no TV, and people listened to music.

An ad for Kent’s Edison store from October 1918, called for people to spend their time at home listening to music with the New Edison phonograph. “Escape the Flu! By spending the evening in your own home with a NEW EDISON, the phonograph with a soul!” This Morell Tilson & Sons shop’s ad from The Evening Start, October 9, 1918, used a different tactic to market the Edison. They highlighted that with public concerts canceled, the Edison would be a great replacement. “You can attend concerts of grand opera, light opera, sacred music of the fine old songs without running any risk of contracting influenza.” Early on in the Covid-19 pandemic, sanitation products were sold-out and hard to come by. In 1918, just like today, sanitation products were in high demand. There was no such thing as hand sanitizers that kill 90+ percent of germs. Sylpho Nathol was used for years before the start of the Spanish Flu to fight infantile paralysis and polio. During the Spanish Flu, it was marketed as the best product to kill the virus.

This ad, published in The Boston Post on November 20, 1918, advertised the “germ killer” as the best precaution: “Today you must use every precaution to eliminate all sources of infection.” Many different health products were presented by various companies as the number one drug to prevent the disease. A product named NR (Nature’s Remedy) for digestion promised to do the job. “Nothing you can do will so effectively protect you against the Influenza or Grippe epidemic as keeping your organs of digestion and elimination active and your system free from poisonous accumulations.” Peruna, patented medicine that was used by many Americans and endorsed by 50 U.S. congressmen, was advertised as the best medicine against the flu. Just like today, during the Spanish Flu in 1918, many businesses were trying to make the best of a difficult situation and use it to their advantage

This advertisement claims that “One of the best preventatives to keep away the ‘Flu’ is to provide yourself with good warm underwear”: This one claims that eating well will make sure that you fight the flu properly: Global pandemics lead to economic strife for many, but also bring about an abundance of creativity and adaptation in the fight to survive economically.

Search our newspaper collections to discover the stories of your own ancestors, or order a MyHeritage DNA kit today, at our special Black Friday prices! 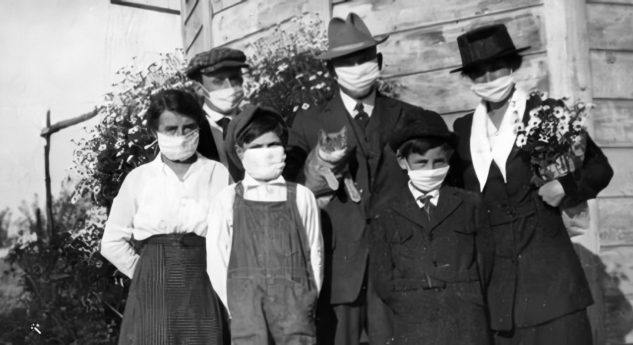