Viktor Okmian, a Holocaust survivor, last saw his father Boris, mother Dobra, brother Ralph, and two grandparents in 1941. That was when his entire family was murdered by the Nazis in a Rumbula Forest massacre in Riga, Latvia. Some 25,000 Jews were killed during that event. Thanks to MyHeritage, 77 years after being separated from his parents, Viktor was finally able to see photos he had never seen of his family.

Viktor, then 13, was at a summer camp. Two days before the Nazi occupation, the parents of another child at the camp managed to smuggle Viktor and his friends from the camp to Russia. From there, he went to Siberia.

After the war, he returned to Riga and studied construction engineering at the university. In 1956, he married and had two children. He immigrated to Israel in 1974 and then to Berlin. Until recently, he divided his time between Berlin and Zurich, Switzerland.

Asi Nisselson Lurje, a Latvian Jewish researcher who runs the Facebook group, “Latvian Jews,” has built a family tree with over 40,000 Latvian Jews, including members of Viktor’s family. Viktor’s granddaughter, Alexandra Okmian, had also built her family tree on MyHeritage and was surprised to receive matches to Asi’s tree. Alexandra soon discovered that Asi had much information about her family. She quickly contacted Asi and he said he had photos of the Okmian family, received from the National Archives in Riga.

Alexandra was shocked when she heard there were photos because she knew that Viktor had no images of his parents or grandparents.

Now we saw for the first time that Grandpa had a brother named Ralph — whom we did not know at all.

On September 24, 2018, Asi sent the photos to Alexandra while she was visiting Viktor in Zurich. It was an extremely emotional moment. 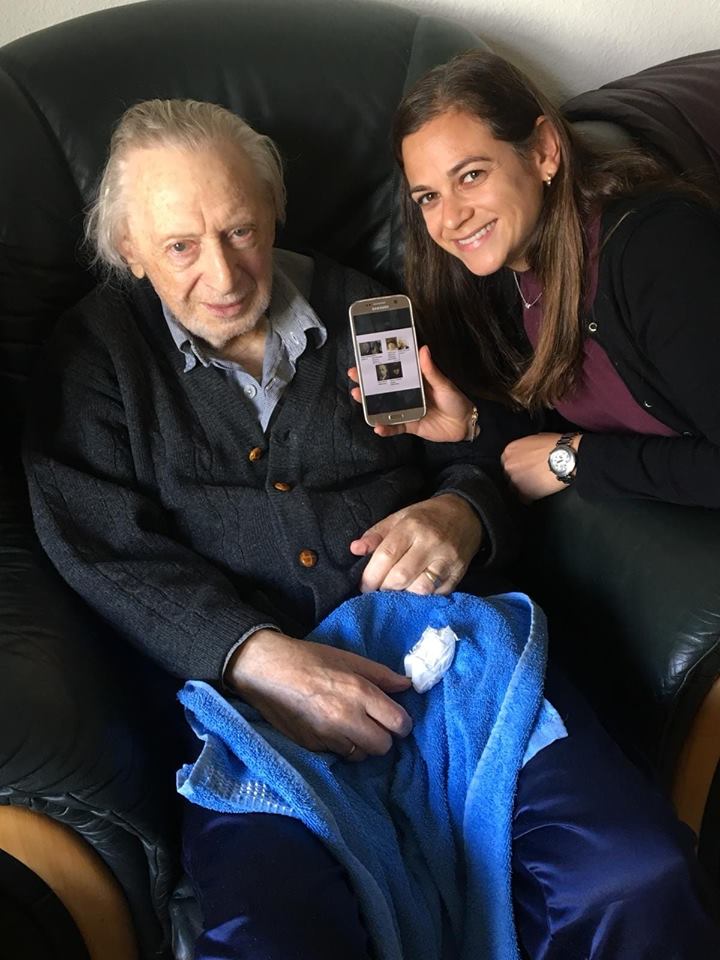 Grandpa looked at the photos and immediately recognized his father and mother, he was shocked and tears filled his eyes. The next day I brought him the photos again — this time printed — he looked at them and began to tell me the story of his family, which included details he had never talked about before, I think he knew he would soon leave the world.

Asi Nisselson Lurje, whose research on the Latvian Jewish community had helped locate the photos, also discovered that he was distantly related to the Okmian family.

Fate connected me to this family of 4,000 names, and Viktor was moved to tears from the photos; he was very ill and his condition had deteriorated after his wife died. His grandchildren told me that his last 10 days were his happiest.

MyHeritage applauds community researchers, like Asi, whose work helps to bring families together, to reunite them after such tragedy, and to bring such intense happiness to survivors even at the end of their lives.