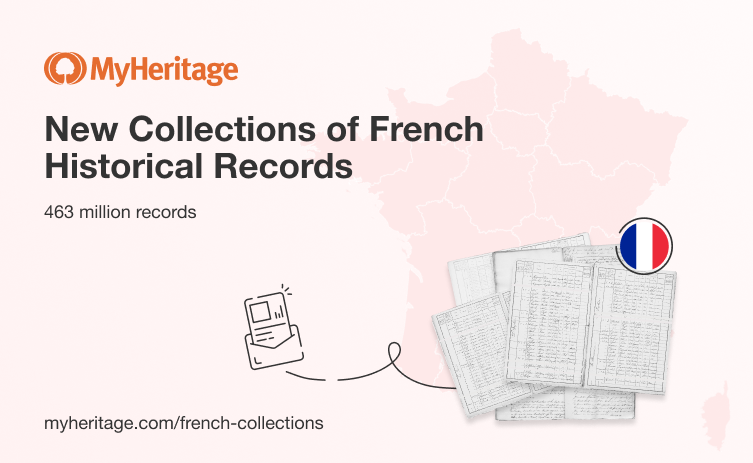 We are thrilled to announce the publication of 463 million historical records from France in 5 collections: birth, marriage, death, and two censuses. The collections provide the most comprehensive coverage available for vital records from France in the 18th, 19th, and early 20th centuries. Until now they have been available exclusively through Filae, a leading French genealogy company recently acquired by MyHeritage. The collections cover nearly every department in France and include a high-quality index of the transcribed records and digital images of the original documents. Millions of these records are exclusive to MyHeritage and Filae and cannot be found on other commercial sites. By the end of the year, MyHeritage will publish hundreds of millions of additional records from Filae, further solidifying its position as an invaluable resource for anyone researching their French heritage. These new collections significantly bolster MyHeritage’s historical record offering in France, with a total of 514 million French records, and bring the total number of historical records on MyHeritage to 15.6 billion.

Coverage of the French Birth, Marriage, and Death Collections

The MyHeritage baptism/birth, marriage, and death/burial records span centuries of French history and contain millions of vital records that are exclusive and cannot be found on other commercial genealogical sites. These collections serve as the preeminent source for French vital records, covering all but one department around the country, and covering most of the French population since the 18th century.

Each of the collections contains both parish records and civil records. Starting as early as the 16th century, parish priests collected baptism, marriage, and burial records in parish registers. In the midst of the French Revolution, in 1792, the Legislative Assembly declared that vital events were to be recorded by civil officials. Mayors were then tasked with collecting birth, marriage, and death records. All 3 of the collections cover both pre-and post-revolutionary France.

In the infographics below, you can see more details on the geographic coverage of the parish and the civil records in the MyHeritage collections. In dark pink are the departments that are covered by each of the time periods and record types.

In the first infographic, you can find the departmental coverage of the civil birth, marriage, and death records which were collected after 1792. The collections cover 95 of the 96 metropolitan departments and 4 of the 5 overseas departments. 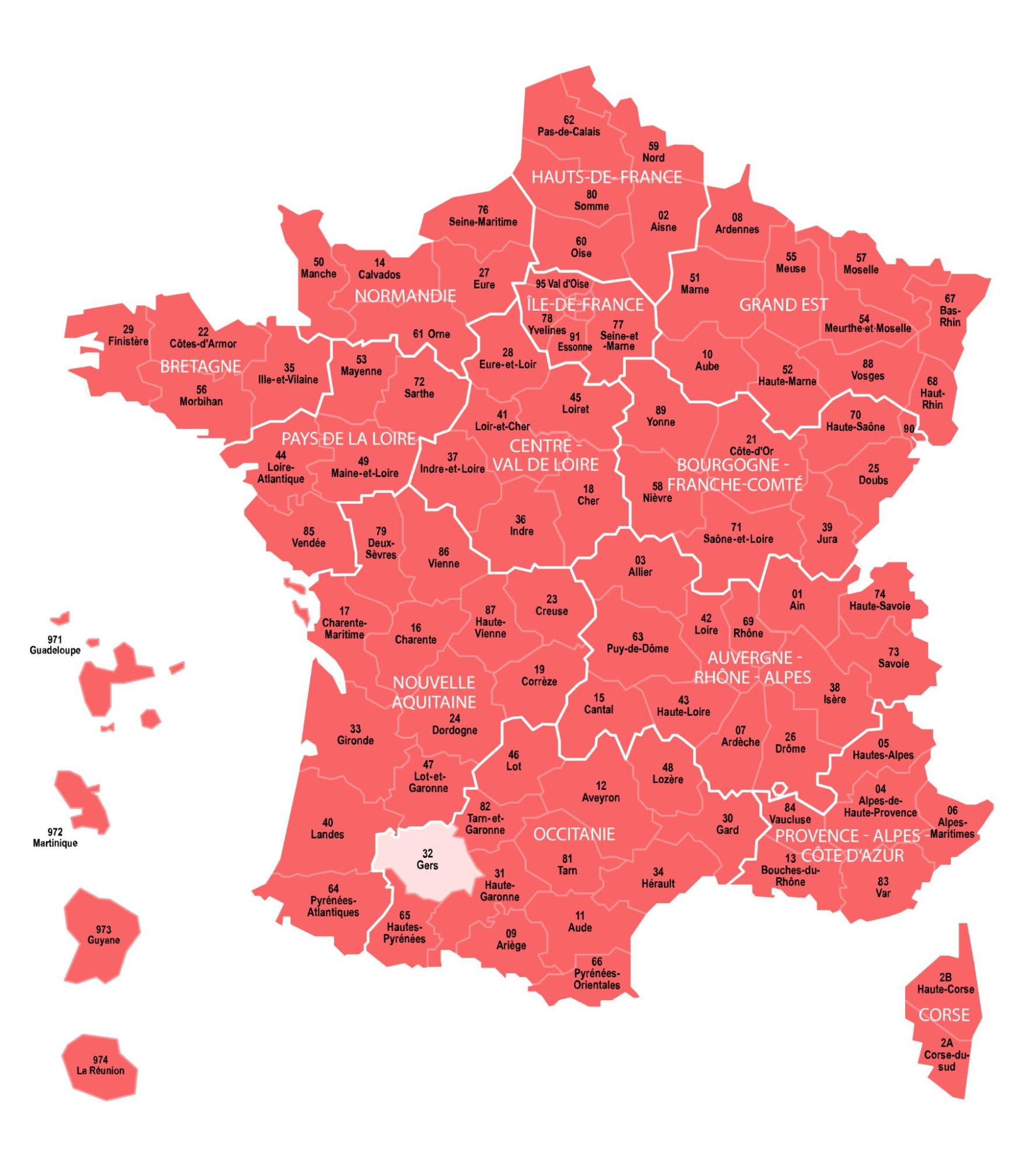 The departments in dark pink show the geographic coverage of civil birth, marriage, and death records in the MyHeritage French collections

In the infographic below, you can find the departmental coverage of the parish baptism, marriage, and burial records which were collected prior to 1792. 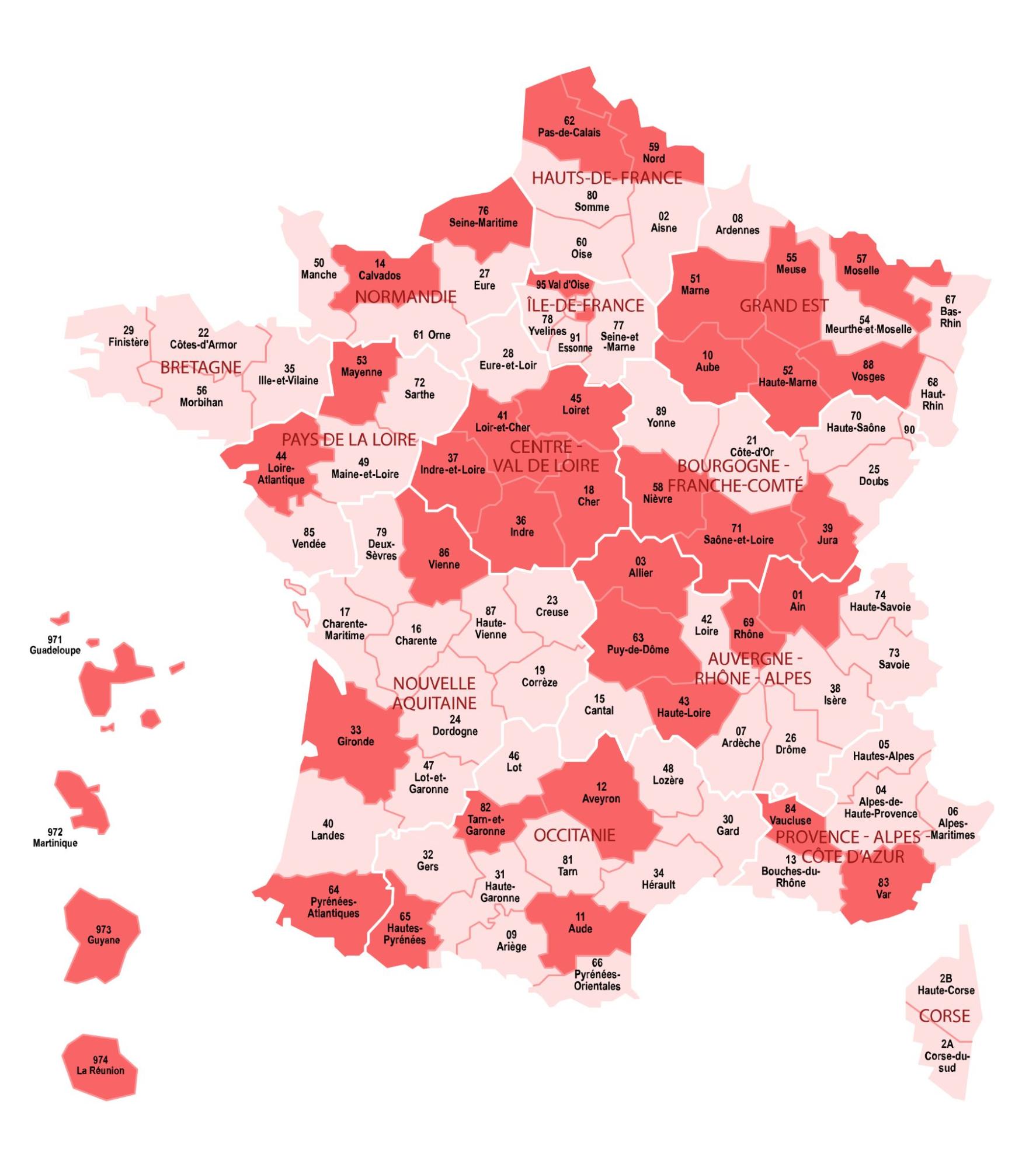 The departments in dark pink show the geographic coverage of parish baptism, marriage, and death records in the MyHeritage French collections

The 156 million records in the collection contain church baptisms and civil births recorded in France and include images. Many of these birth records are exclusive to MyHeritage and Filae. The indexed records include the name of the child, birth date, and birthplace and the images associated with the records provide additional information on the child’s parents.

The collection starts from the period when priests began performing and documenting baptisms of newly born infants, from 1539, and then continues with births recorded by civil registration officers from 1792 to 1900.

The recording of baptisms officially began in 1539 under an edict of François I. Following the recommendations of the Council of Trento, which concluded in 1563, and a canon issued by Pope Pius IV on 26 January 1564, parish priests were instructed to maintain written records of baptisms, giving the name of the child and parents (often only recording the mother’s given names) and the date of baptism. The canon of 1564 and another edict in 1579 became the main driving reform within the clergy to adopt these record-keeping practices. In 1667 an additional reform under the ‘Code Louis’ required the mother’s full name be recorded and the record to be signed by the father and by the godparents. Starting in 1736 the child’s actual date of birth was to be included as well.

Civil registrations of births were first introduced in September 1792 and show additional information such as the place, date, and time of registration as well as the child’s full name, the parents’ names (the mother’s maiden name), ages, occupations, and domicile. Recording and maintaining civil vital records became the responsibility of the local mayor, who also acted as the Registrar (Officer de l’Etat Civil) — although this function was often delegated to another officer in the town hall. The Registrar was to be notified of births within 3 days.

This collection of 126 million records consists of church marriages, civil marriages, and select marriage banns (announcements of intent to marry) recorded in France and includes images. Many of the records are exclusive to MyHeritage and Filae. The indexed records include the name of the bride and groom, their marriage date, and the marriage location. Additional details can often be found on each record’s associated image, including information about the couple’s birth dates and places, their parents’ names, and if relevant, information related to the death of one or more of the parents. Also included are the names and details of witnesses, often with recorded relationships to the bride and groom.

During the French Revolution, and starting in 1792, religious marriages were no longer legally valid and couples wishing to marry were required to do so civilly. A law passed in 1798 required citizens to be married at the canton seat instead of the local commune. This law was abolished in 1800, when couples were again allowed to marry in their local commune. With the exception of this brief time period (1789–1800), it was customary for at least one member of the prospective marriage to be a resident of the commune where the civil marriage occurred. The Registrar (Officer de l’Etat Civil) recorded the marriages they performed, usually in a prescribed paragraph format, bound in a book and kept in the registrar’s office.

This collection of 149 million records consists of church burials and civil deaths recorded in France and includes images. Many of the records are exclusive to MyHeritage and Filae. The indexed records contain the name of the deceased, their death date, and death place. Additional details can often be found on each record’s associated image including information about the deceased’s birth date and place, marital status (widowhood, divorce), residential address, parents’ names, or the name of their spouse(s) and sometimes death of the spouse(s). Deaths were usually recorded within a day or two of the passing in the same commune where the person died.

Typically, these records have two witnesses or informants, and often one of them is a close relative of the decedent. A soldier who died away from home can also be found in these records in the town where the soldier was born, but records like these were often not entered until a year or two after the soldier’s death. If a child was stillborn, the child’s information will be contained in the death records in the commune where the stillbirth occurred.

The 1872 census collection consists of 16 million records from 67 departments of Metropolitan France and includes images. The collection includes the given names, surnames, ages, birth places, and residence information. Additional details found on each record’s associated image include occupation, family relationship, and nationality.

MyHeritage further enhanced these collections by inferring relationships within the household, providing deeper insight into family connections and increasing the chances of receiving matches to these records.

The 1872 census was conducted between April 15, 1872 and May 15, 1872. Census records provide an excellent resource for finding ancestral family members living together and identifying their relationships, ages, inferred birth years, and birth places.

This census collection from 1906 consists of 17.6 million records and includes images. The indexed census records are from 63 departments in France and include given names, surnames, birth years, birth places, and residence information. Like the 1872 census, MyHeritage enhanced this census collection by inferring relationships between members of the household, when possible. Additional details found on each record’s associated image include occupation, family relationship, and nationality. Paris is not included in the 1872 and 1906 collections, as census taking in Paris only began in 1926.

The official day of enumeration for this census was March 4, 1906.

A record of celebrated French journalist Émile Zola can be found in the Church Baptisms and Civil Births collection. In 1898 Zola bravely wrote an open letter to the President of France in a newspaper article entitled J’accuse! protesting the unlawful trial of Jewish army officer Alfred Dreyfus. Zola argued that the court’s religious prejudice led them to convict Dreyfus of treason and sentenced him to life in prison despite a glaring lack of evidence. The MyHeritage record shares his date of birth, April 2, 1840; his place of birth, Paris 3e (Ancien), Paris, Île-de-France, France; and the source, Etat-civil – Archives de Paris. The record also includes an image of the original record. 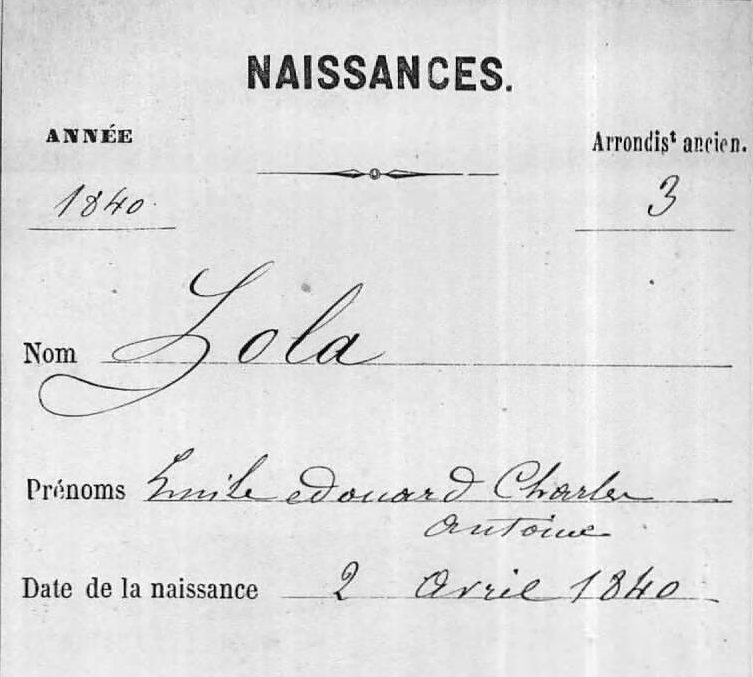 The Church Baptisms and Civil Births collection also contains a record of Sidonie Gabrielle Collette, the multitalented French writer, actress, journalist, and mime, known simply as Collette. The record shares her birth date, January 29, 1873; her birth place, Saint-Sauveur-en-Puisaye, Yonne, Bourgogne-Franche-Comté, France; and the source of the information, the Archives de l’Yonne. Alongside the record is an image of the original record. 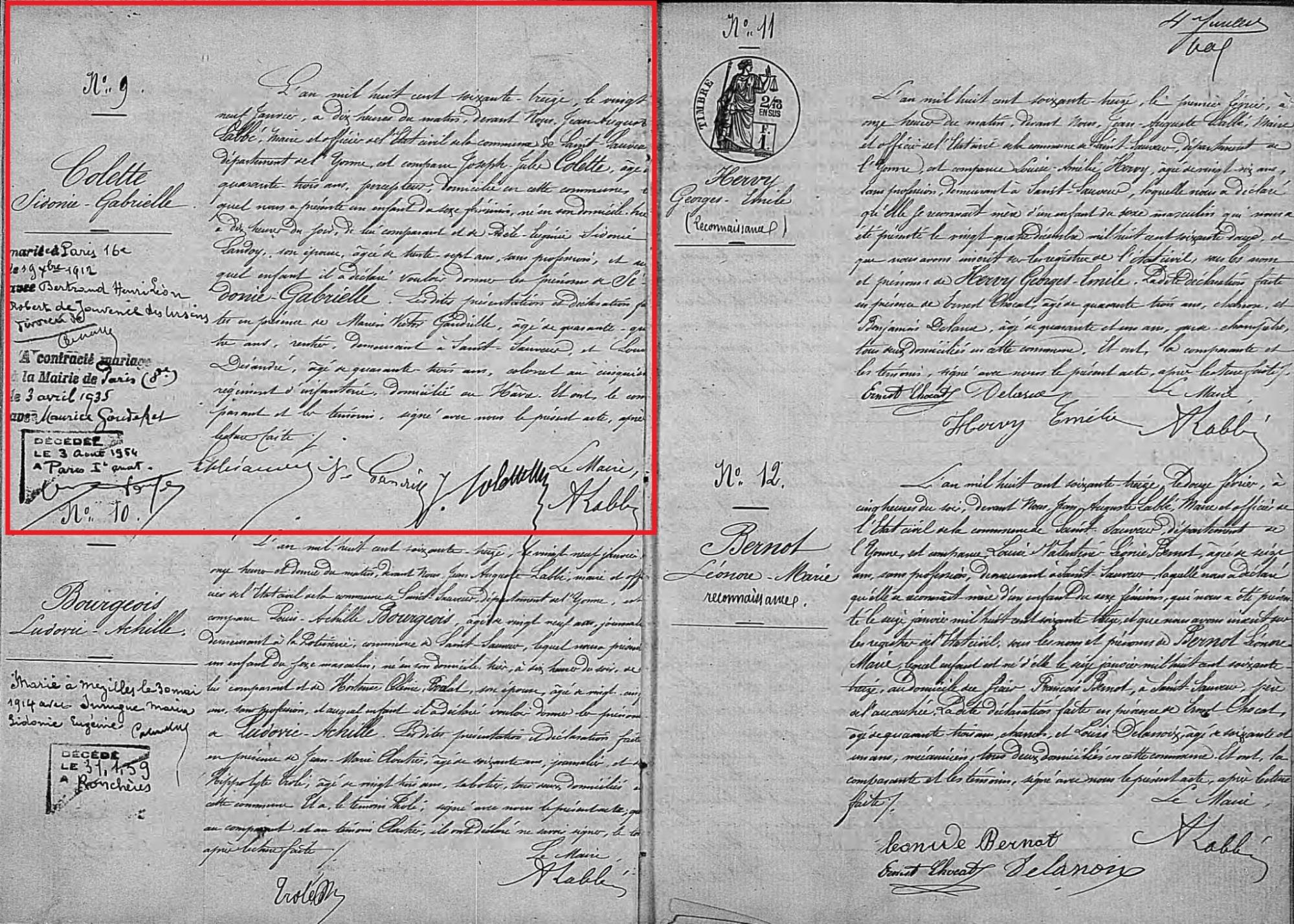 The Church Marriages and Civil Marriages collection contains the record of beloved novelist Jules Verne, known for his world-famous titles, Around the World in Eighty Days and Twenty Thousand Leagues Under the Seas. The record details his marriage to Honorine Morel. The marriage took place on January 10, 1857 in Paris. Accompanying the record is an image of the original record. 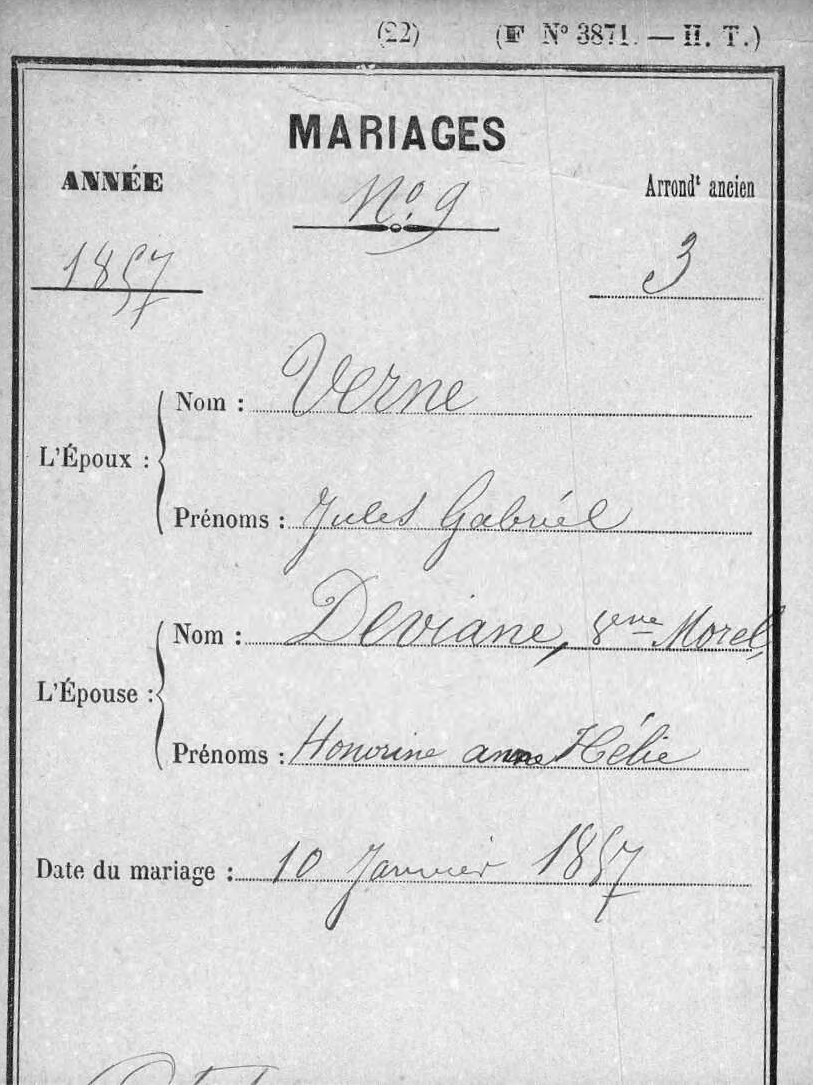 The Church Marriages and Civil Marriages collection also includes the marriage bann record of Jean Jaurès, a historian and one of the leaders of the early 20th century French socialist movement. The record states that Jean Jaurès announced his marriage to Antoinette Marie Louise Bois, on June 20, 1886 at Albi, Tarn, Occitanie, France. In addition to the indexed information, the record includes a scanned image of the original marriage bann. 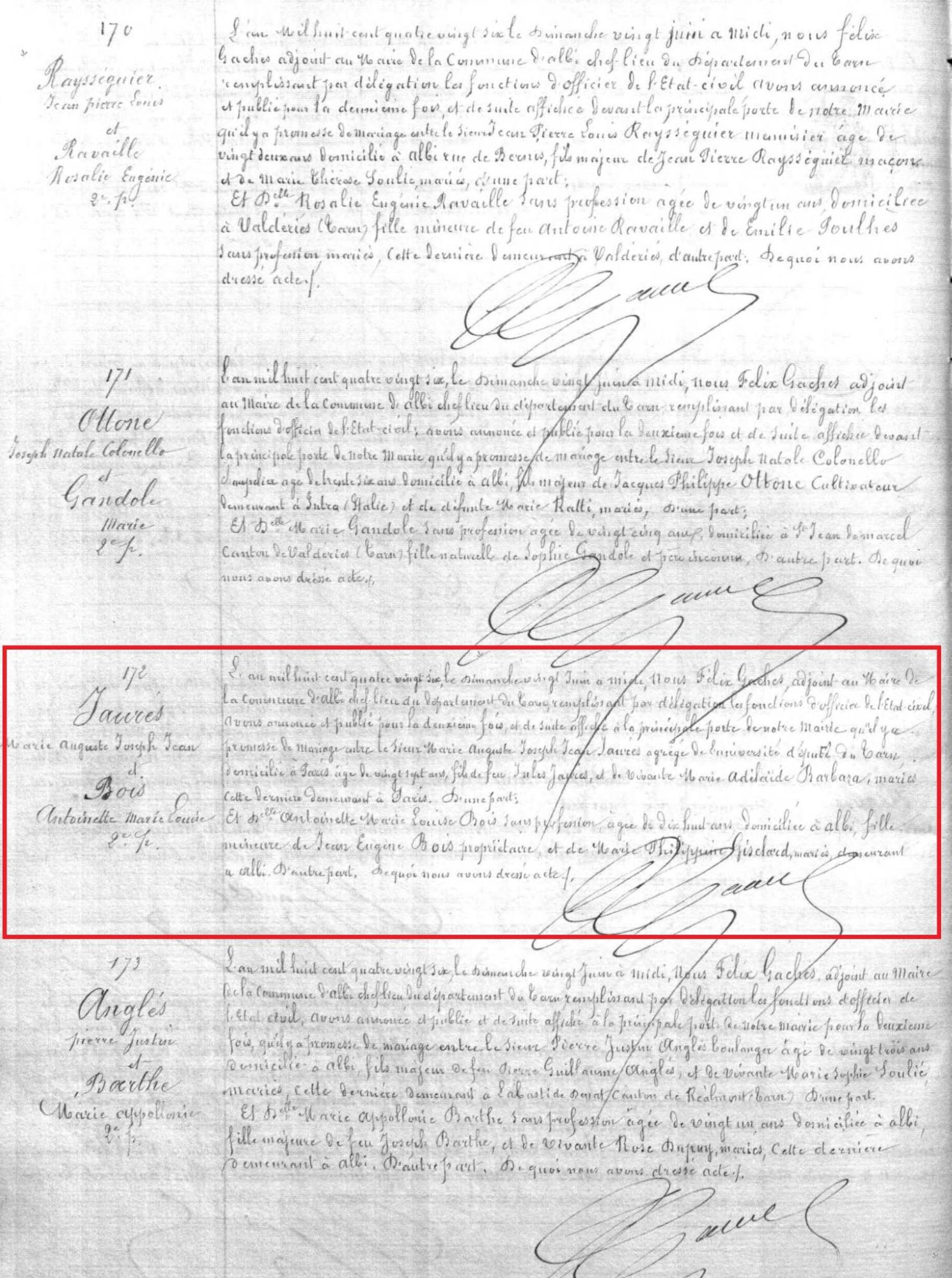 The Church Burials and Civil Deaths collection includes the record of influential French writer Marcel Proust most known for his novel, In Search of Lost Time. The record on MyHeritage shares details about Proust’s date of death and location; November 18, 1922, Paris and the source of the information, the Etat-civil – Archives de Paris. The record also includes an image of the original record. 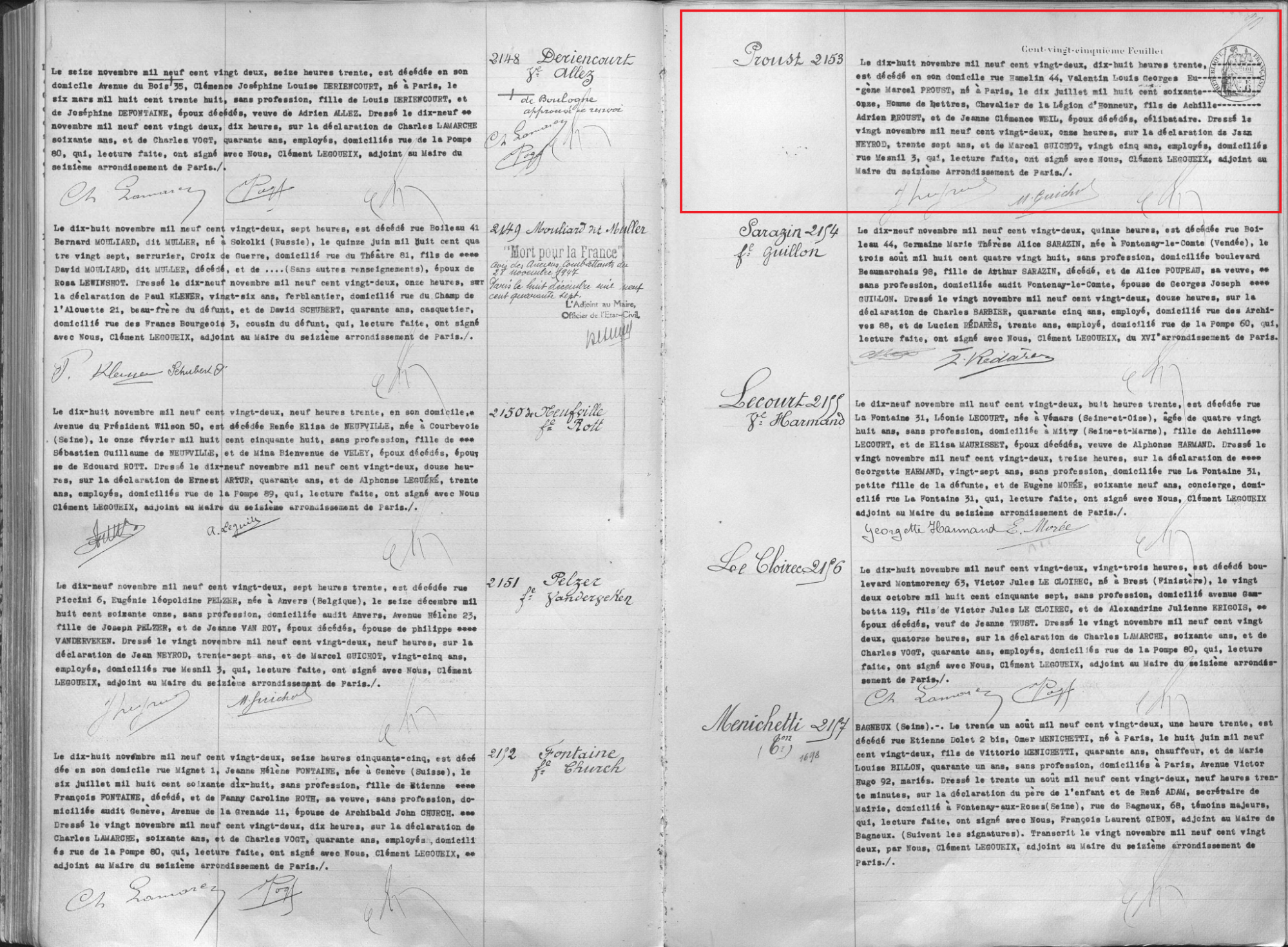 A record of Claude Monet, one of the most renowned impressionist painters, can be found in the 1872 census collection. 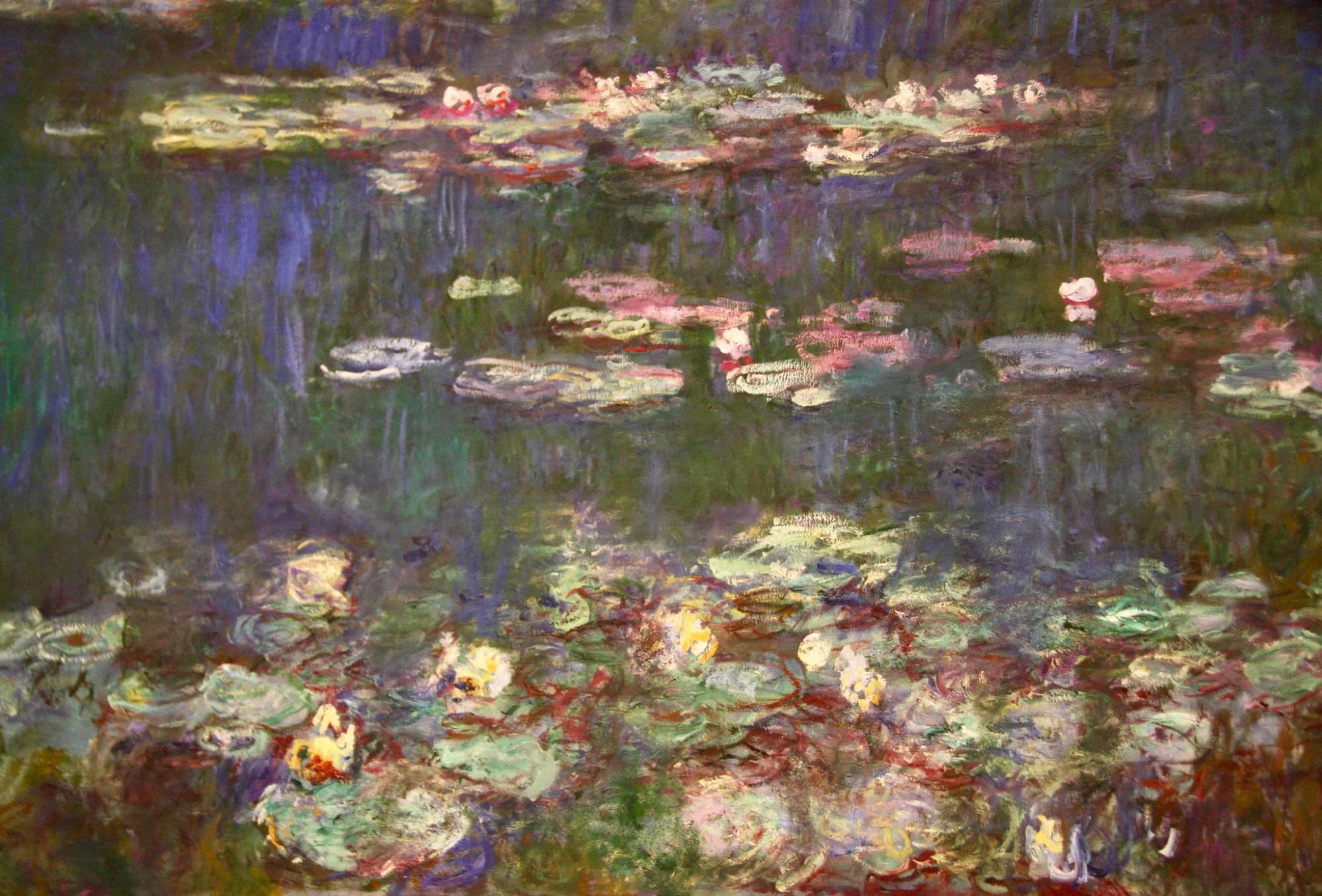 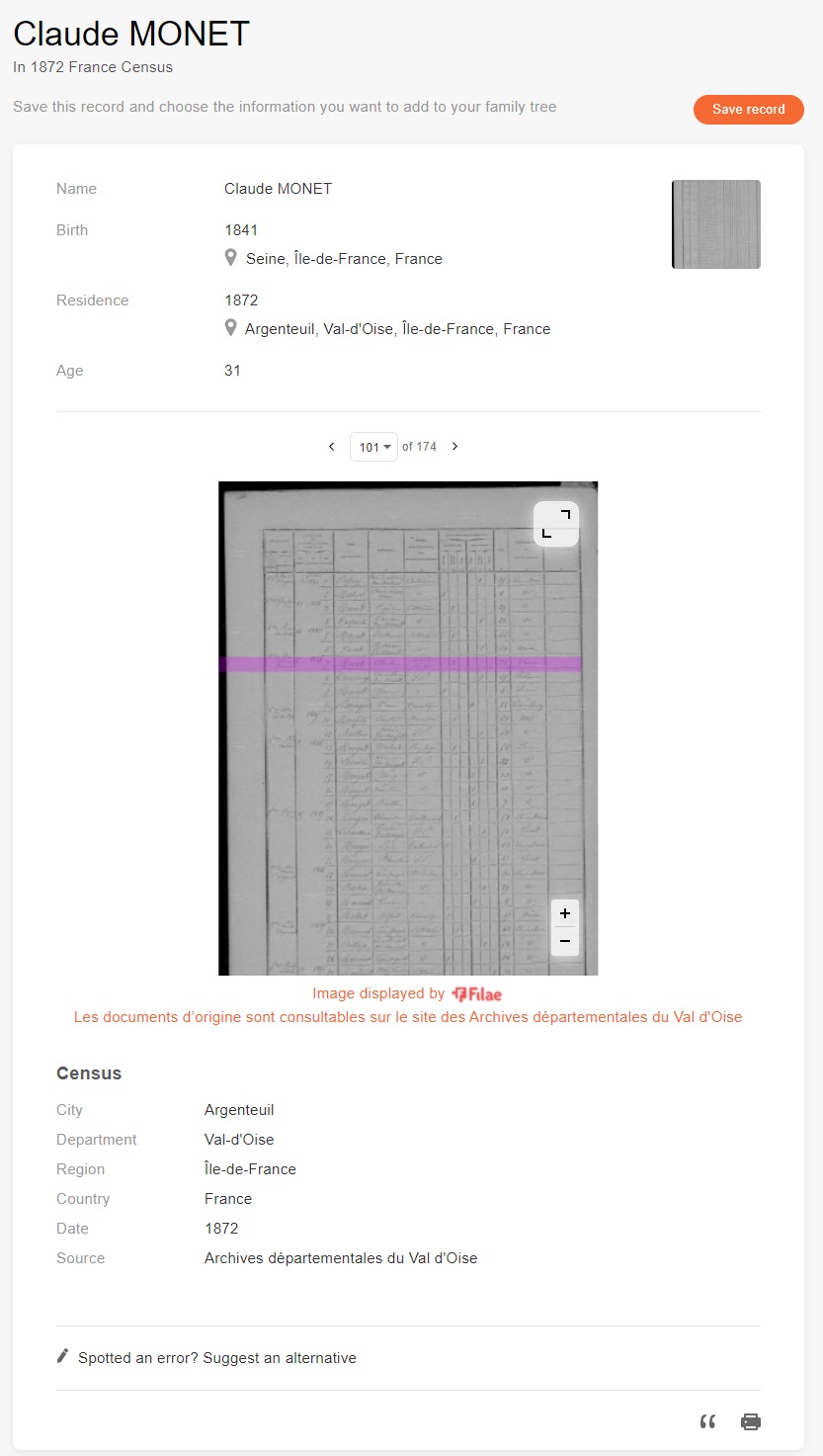 Another noteworthy record in the French collections is the census record of Jean Moulin, one of the leaders of the French resistance during World War II. The record consists of a comprehensive index as well as an image of the census. MyHeritage enhanced this census collection by inferring relationships between members of the household. You can click each name to flip between records of different household members.

The addition of these French historical record collections benefits millions of genealogy enthusiasts in France and MyHeritage users worldwide who have French roots.

Searching the collections on MyHeritage is free. Furthermore, the records will be automatically compared to the 81 million family trees on MyHeritage using Record Matching technology, and users will be automatically notified of matches that may help them advance their knowledge of their family history and make new discoveries. To view these records or to save records to your family tree, you’ll need a Data or Complete subscription.