My Brother Vanished at Age 3. MyHeritage Helped Me Find Him 32 Years Later One autumn day in 1988, two little boys were playing together in their garden in Bogota, Colombia while their older brother watched from a second-story window. A family friend approached them and asked one of them, Jhonatan, to come with him, offering to buy him some candy.

Juan Jimenez was 5 years old when he watched from the window as that man walked away with his little brother. Riddled with grief and guilt that he had failed to prevent his brother’s disappearance, he tried everything in his power to help his mother find Jhonatan. As an adult, Juan moved to the United States — where they believed Jhonatan had been taken — with the thought that even if his efforts to find his brother failed, at least he would be physically closer to him.

One day, he saw an ad for MyHeritage’s DNA Quest: a pro bono project to donate DNA kits to adoptees and help them reunite with lost family members. Juan applied for a free kit, and MyHeritage sent him one.

Meanwhile, Jhonatan, now named John Erik Aarsheim, had grown up with a loving family in Norway that never suspected he’d been abducted. His adoptive parents, Karen and Gunnar, adopted him from an orphanage near Bogota, having been told that he’d been found in the street and that all television and newspaper ads looking for his parents had gone unanswered. Karen and Gunnar brought Jhonatan to their home in Stad, where he lived a quiet, happy life with his grandparents next door. As he grew up, all he had of Colombia were vague memories and a niggling curiosity about his origins. Who were his parents, and why had they abandoned him?

When John was 30, he decided to take a DNA test to see if he could find any information about them, but nothing came of it. He became resigned to the fact that he would probably never know.

But then, John heard about MyHeritage’s Health upgrade and decided to take a MyHeritage DNA test to learn how his genes might affect his future health. When his results came through, he glanced at the DNA matches just out of curiosity — and there, right before his eyes, was a match he never dreamed he’d see: half-brother, uncle, or nephew.

John wrote to Juan right away, describing the details of his story and asking what he knew.

When Juan got the message from John, he was overjoyed. He picked up the phone and called his mother, and even before he said anything, she knew he had found Jhonatan.

Juan told John the whole story of his disappearance. It was a lot to take in: not only had his parents not abandoned him, his mother had been looking for him and missing him all that time. All of a sudden, he had 3 brothers and a sister, too.

John was both excited and nervous to meet the family that had been searching for him for 32 years. A few months after that first contact, Juan flew to Norway to bring John back to his home city. Watch Juan’s touching video he made of their reunion:

John arrived in Bogota to a royal welcome: the family had rented a chiva, a Columbian party bus, that traveled with a police escort to the home he’d been taken from. The whole family was waiting for him there, waving Norwegian flags and holding signs bearing his name. And there, in front of the house she’d never sold in hopes he would find his way back to it, was his mother, holding a sign that read: “I missed you a lot, son of mine. Welcome home. I love you.” The next few days were a whirlwind of hugs, tears, and joy. John was overwhelmed by the love his family had for him and their elation at having found him at last. He says he saw many aspects of himself in his long-lost relatives. Through all this, he sent regular updates to his adoptive family in Norway, who are very happy for him. 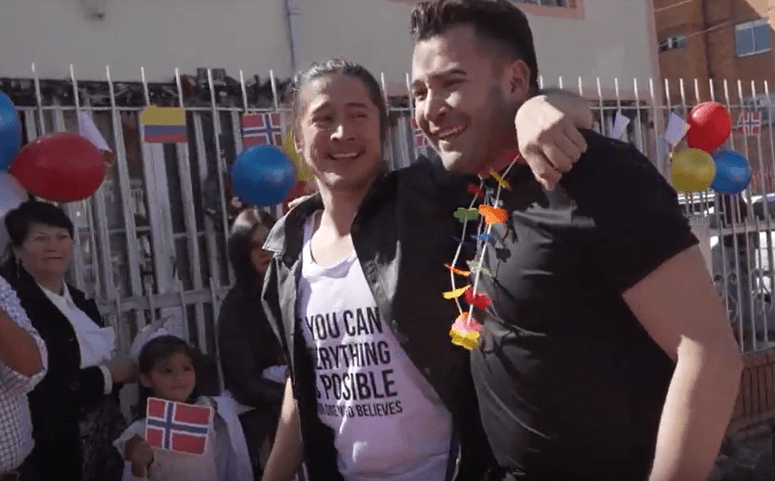 John encourages other people seeking lost family members not to give up hope: to know that maybe someone, somewhere, has been waiting their whole life to hear from you.

Order your MyHeritage DNA kit today — who knows what you might discover?