Lisa, a MyHeritage user from England, has been researching her family history for over 30 years. For most of that time, a quarter of her ancestry was blank, as her mother’s birth father was unknown. She set out to uncover his identity using DNA and research… and not only did she uncover his identity, she also stumbled across some astonishing family secrets. Here is her story:

My mum Linda was born in October 1946 in Battersea, London. Her 18-year-old mother, Lilian Monger (my grandmother), was unmarried, and the name of mum’s father was not shown on her birth certificate.

When my grandmother married in March 1949, my mum was re-registered with her new father’s surname. From my mum’s perspective, Joe Fenley had always been her dad. It was a relative who revealed to my mum that her birth father was another man. Mum must have asked my grandmother about it at the time, but she received no answers. After that: silence. Mother and daughter never spoke of it. Mum always assumed she was the result of a brief liaison after 6 years of war, and that her birth father never knew of her existence. We talked about it occasionally, and I know she would have liked some answers, if only to satisfy her curiosity; but as the years went by, it became harder to broach the subject with my grandmother. When I began researching my family history, I spoke to my grandmother’s siblings, but no one had known the identity of mum’s birth father. My grandmother had remained silent even in the summer of 1946.

My grandmother died in 1998, taking her secret — and any hope of finding out the truth — with her. That might have been the end of the story but for the advent of the internet and easy access to DNA testing.

After 30 years of research, in August 2020, I began writing a book about my maternal history. I decided to take a DNA test. The results revealed several close matches whose names I recognised, but a few of the names were new to me. Because my dad had also taken a test, I could identify which matches must be related to me through my mum’s birth father. (My mum died in 2013, before DNA testing became widely available.)

I started by constructing a family tree around those close matches, and managed to plot about 250 names. I identified our common ancestor: a woman named Hannah Thackra, born in Newcastle upon Tyne in 1871. If my close matches are descended from her, and I am related to them, then logic dictates that Hannah Thackra is my ancestor also.

It was a thrilling discovery. A quarter of my bloodline that had been blank for 50 years suddenly contained names and half-shadows of people with whom I share a kinship.

I was tantalizingly close to discovering the identity of my mum’s birth father, but the DNA would not yield its secrets. At times, grappling with the tangle of facts and DNA evidence relating to the Thackra family felt like wrestling an octopus: no sooner had some tentacles been pinned down, than another broke loose. In hindsight, the answer was staring me in the face, but, at the time, the identity of mum’s birth father eluded me for reasons that became clear later.

One of my relatives had taken a DNA test with MyHeritage, and this prompted Dad and me to do the same. My DNA results revealed several different close matches.

Two messages and one reply later, the pieces tumbled into place like cascading dominoes. In the space of half an hour, my DNA Matches on MyHeritage had unlocked a 76-year-old family secret. Mum’s father was born in Jarrow on Tyneside in 1924. His name was Robert Howes.

To say it was an emotional moment was an understatement. Robert Howes in his British Army uniform in 1946.

From my first DNA test, it was clear that I had inherited DNA from the Thackra and Claringbold families. Initially, there was only one person who possessed this combination of DNA: Hannah Thackra and Robert Claringbold’s son, Christopher. However, he had returned to Canada in November 1945 after fighting in Europe during the Second World War, so he couldn’t be mum’s birth father.

No one else fitted the criteria until the MyHeritage DNA test revealed a scenario I had not considered: my mum’s birth father had been fathered by his mother’s stepfather (that is, his father was his step-grandfather). Robert Howes was the child of Linda Howes and Robert Claringbold. It is not documented anywhere and is clear only from analyzing the DNA. To quote one of the world’s most famous fictional detectives, Sherlock Holmes: ‘When you have eliminated all which is impossible, then whatever remains, however improbable, must be the truth.’ Science does not lie.

And if that wasn’t enough — the DNA Matches revealed another secret. My great-great-grandmother, Hannah Thackra, had had an affair. Linda Howes was not her husband’s child. Linda’s father was a Litvak, a Lithuanian Jewish man called Louis Levy. He had emigrated from the shtetl of Darbenai to England in the 1890s and settled in South Shields. The family is well-documented and I’ve been in touch with cousins in the United States who provided me with a photograph. I ran it through MyHeritage’s Photo Enhancer tool and Deep Nostalgia™ — Louis was a heartbreaker! 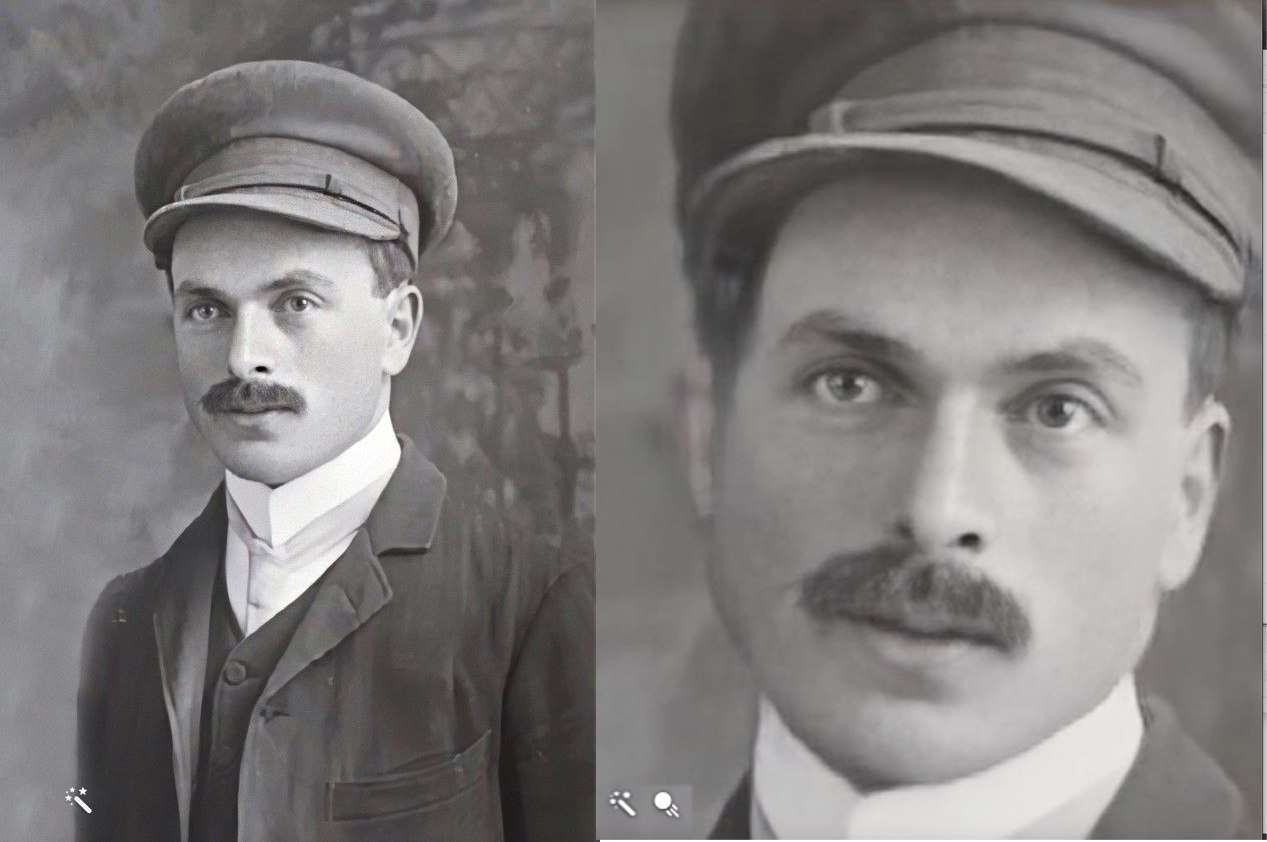 Believed to be my great-great-grandfather, Louis Levy (there is a strong resemblance with confirmed photographs of Louis’s siblings). (left) Using MyHeritage’s Enhanced photo option, and (right) a screen capture of Louis using the Deep Nostalgia™ software.

I kept my family up to date with my progress and discoveries. They’ve been very supportive and were thrilled I had solved the mystery, particularly my grandmother’s two sisters. I know my mum would have been delighted too.

My mum’s birth father died in 1984, but I discovered that he had three children after my mum was born. Through a combination of birth records, electoral registers and social media, I managed to locate them. I wrote to them — perhaps the most important letter I’ve ever written. They were stunned. Mum had been right: her birth father had not known of her existence. He and my grandmother must have had a brief romance while he was in England on leave before returning with the British Army to Karachi in what is now Pakistan.

The family has been very welcoming and helpful. They’ve sent me photographs and a copy of their dad’s military service record. It confirmed he had been on leave in London until February 1946. The family also confirmed Robert Howes’ parentage, which proved my theory about his step-grandfather being his father.

I’ve met one of my mum’s half-siblings and hope to meet the rest of the family later this year. The experience has been very positive for me. Most importantly, I have completed mum’s story and revealed a new one in the process, as well as unlocking a quarter of my genealogy. My mother Linda Monger (later Fenley) in about 1956

If you are on a similar journey and are struggling, my advice to you is: don’t give up! Finding lost family takes experience and skill, but it also takes luck. Your success will depend on who is in the database and perhaps who replies to your enquiries. DNA is being submitted all the time — you never know when someone will take a test and provide the breakthrough you need. My breakthrough came from someone whose name I did not recognise and with whom I share just 3.3% of my DNA (a half-first cousin once removed).

Finally, remember Sherlock Holmes: “When you have eliminated all which is impossible, then whatever remains, however improbable, must be the truth.” Science does not lie.

Many thanks to Lisa for sharing her incredible story! If you’re searching for answers about your family’s past, MyHeritage DNA is a great place to start. Order your kit today.