Newfound in Newfoundland: Thanks to MyHeritage DNA, Daughter Finds Father Who Never Knew She Existed 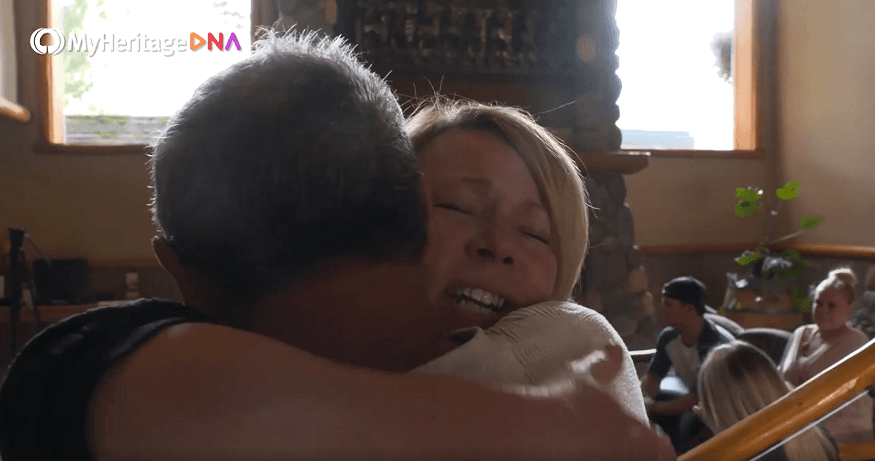 Linda Brown grew up in Newfoundland, Canada knowing she’d been adopted. In her late 20s, she met her biological mother, but the identity of her birth father remained a mystery… until she took a MyHeritage DNA test.

Watch her emotional reunion with her father here:

Linda was able to locate her birth mother, a brother, and a sister through an agency, but she wasn’t able to find any information on her father. “I was so thankful for meeting them, but part of me was like… I gotta find my birth father,” she says.

Linda’s birth mom didn’t know who her father was; all she could tell her was that he was an American. Linda knew was that there were military bases in Newfoundland where many U.S. soldiers were stationed around the time she was born, and that her biological parents met in this context.

So a few years ago, in an attempt to get some leads on the identity of her father, Linda got access to some military lists. A friend of hers helped her go through these records and contact the people listed on them to ask if they knew Linda’s story. One of the people who responded was a man named Dallas Stone from Utah in the United States. Dallas offered to help as much as he could and provided some more names, but he wasn’t aware of a story like this, and none of these new contacts led to anything.

After a long, exhausting search, Linda had all but given up… and then she decided to try a MyHeritage DNA test.

After just one week, she got the message in her MyHeritage inbox that changed everything:

This woman had turned up as a close DNA match for Linda, but she was bewildered by it, as she only had one brother and she already knew all his children. Her brother was in the process of uploading his results to MyHeritage from another provider — and sure enough, he came up as a 50% match for Linda, proving that he was her father.

She wrote back to Linda and said: “I know who your father is.”

“I read that sentence maybe a million times,” says Linda. “I’m like, is this for real?”

As fate would have it, this man turned out to be none other than Dallas Stone — the man from Utah who had offered to help Linda several years before!

Dallas reached out to Linda right away and the details unraveled. He had been stationed in Newfoundland — as they already knew — but he’d had no idea his relationship with Linda’s mother had resulted in a pregnancy. He’d only done a DNA test because he wanted to help his sister with her genealogical research. This was the last thing he’d expected to happen as a result!

Linda soon learned that she has 2 half-brothers and a half-sister.

“Now I’m learning,” says Linda. “We’re just learning about each other. It’s been amazing…  exchanging photos from when we were younger. The similarity — it’s like, oh my God, I can’t look! It’s amazing.”

“You realize as you get older that kids really are the meaning of life,” says Dallas. “It’s your legacy, it’s what you leave behind, what you’re proud of… family is very important.”

“I’m so glad you found me,” Dallas said as they embraced for the first time. Linda responded tearfully that she’s glad, too.

“You know what? In life, sometimes, everything happens for a reason,” says Linda. “My parents were wonderful, they loved me. And now I’m going to build a life with my birth father, Dallas.”

“I really think things will just get better and better as we go along,” says Dallas. “MyHeritage has changed my life tremendously.”

“Thanks to MyHeritage, I found my father, who will be part of my life going forward,” Linda adds.

Linda says she recommends DNA testing to everyone she’s spoken to. “Like, you guys need to know!”