New Historical Records Added in the First Half of November 2019 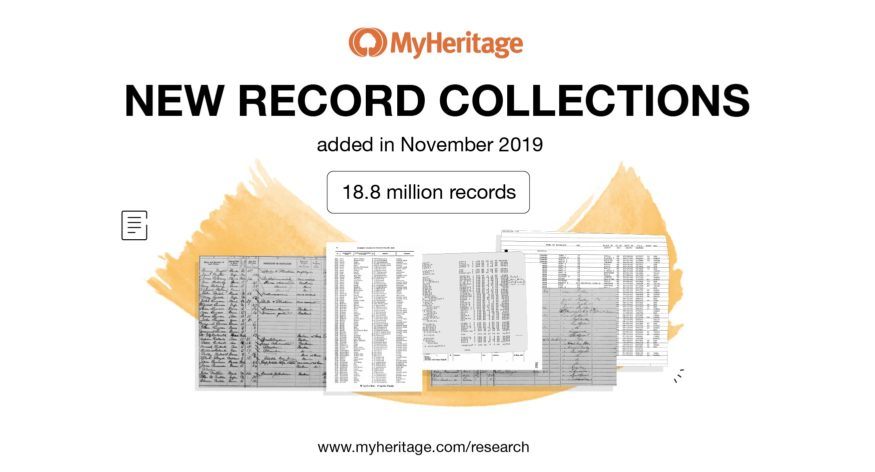 Here is a breakdown of the new records:

The 1801 census was carried out on Sunday, February 1, 1801, and is based on complete lists of individuals. The census contains the names of farms (in rural areas), the full names of inhabitants, the familial ties between household members, their age, marital status, and occupation. For married and previously married people, it was recorded how many times they had been married or widowed. The age listed was the age on the next birthday. The names of smallholdings are typically not included. People were registered in the regions where they belonged. Those who were absent, e.g. sailors, should be listed in their hometowns.

The department of statistics of the Exchequer in Copenhagen prepared the census and processed its results. In the rural districts, the census was carried out by parsons with the assistance of precentors and school teachers. In the towns the efforts were supervised by the Town Administration and carried out by the Subdivision Heads of each conscription district. The town lists are arranged by building numbers. This collection is provided through cooperation with the National Archives of Norway.

This collection of over 1.68 million records is the first national census to list a place of birth for all persons recorded. This census contains the person’s name, residence, status in the family, occupation, sex, marital status, age, place of birth, religion if not a member of the state church, and other miscellaneous information.

Censuses have been taken by the Norwegian government and by ecclesiastical officials for population studies and taxation purposes. Census and census-like records are found from the 1500s to 2000. After 1900, a national census was taken every 10 years until 2000. Access to the national census records is restricted for a period of 100 years after the date of enumeration. Generally, you will find more detailed family information in more recent censuses. Some known deficiencies in the 1865 original census material include records from Gol parish in Buskerud county, Holtålen Parish in Sør-Trøndelag county, Bjerke parish in the Nannestad dioceses in Akershus county, and at least 106 special lists in Kristiania (Old name for Oslo). This collection is provided through cooperation with the National Archives of Norway.

This free collection of 1.1 million records provides details on soldiers from the United Kingdom that died during the wars in the early to mid 20th century. During the first World War, alone, there was an average of over 450 British casualties per day. Information listed on these records may include: name, date of death or burial, burial place, and age at death. These records might also include rank, service and unit of the military as well as any honors earned during service.

The records primarily consist of soldiers from the First and Second World Wars with a few records from different wars. The number of British casualties was smaller in wars following World War II, and the number of records from other conflicts is consequently low. This collection content is copyright of the Imperial War Museums and the index is provided by MyHeritage free of charge as a beneficial service to the genealogy community

Cemeteries can help you trace the burial and or death place of an Estonian relative. Cemetery records may also help identify ancestors when access to church records and census records is limited, or the death was not recorded in other records.

This free collection is an index of marriage records from Mecklenburg County, North Carolina. The records may contain the following searchable information: first name, middle name, and last name of the bride and groom, and the marriage date of the couple. Records may also contain the marriage license number and the date of the application. Mecklenburg County is the largest county in North Carolina by population, and its county seat is Charlotte.

Most records in this collection are from the 20th century or later, with just three percent from before the year 1900. However, there is a select amount of records dated from before 1884, with approximately one percent of the collection falling under this category

This free collection is an index of death records from Mecklenburg County, North Carolina. The records may contain the following searchable information: first name, middle name, last name, gender, and death date of the individual. Records may also contain the certificate number for the death. Mecklenburg County is the largest county in North Carolina by population, and its county seat is Charlotte.

In some cases, the gender is given as unknown along with a missing given name. This usually means the record is for a still-born baby. All records in this collection are from the 20th century or later. However, there is a select amount of records dated before 1916, with the earliest from 1908.

This collection includes an index of obituaries and death records from Lawrence County Pennsylvania for the years 1871-2016. A record may include the first and last name of the deceased, death date, date of death announcement, name of spouse, name of parent(s), and the name of the newspaper that published the information.

Marriage records are a valuable source of information. Marriage records found in newspapers are not limited to a specific form, like most government marriage records, therefore newspapers may contain details about a marriage not found elsewhere, such as names of siblings or other relatives. Newspapers can report marriages of people who no longer live in the area but who still have friends or family there.

This collection of over 12 million records contains information about Chilean voters during the November 17, 2013 elections. Records include the names of voters and the location of the vote. The collection also includes records about canceled voters, mostly because of the death of the voter, and disqualified voters.

We hope you enjoy searching these newly updated collections. If you make any interesting new family history discoveries, let us know in the comments below!