Just a few days ago, MyHeritage’s first-ever documentary film premiered at MyHeritage LIVE in Amsterdam. “The Missing Piece” is a powerful and inspiring film about hope and discovery that shares the story of two sisters, both abandoned as children, overcoming incredible odds to answer the questions of a lifetime.

Watch the emotional and heartwarming documentary in its entirety here:

Christine Pennell and Kim Haelen were born in Daegu, South Korea during a period in Korean history when multiracial children, children born out of wedlock, or those whose parents encountered financial hardship were often sent abroad for international adoption. Estimates suggest that more than 200,000 Korean children have been placed for adoption worldwide from the 1950’s until today.

Kim and Christine grew up worlds apart — Kim in Belgium and Christine in the United States — completely unaware of the other’s existence. It was only when they each took a MyHeritage DNA test that they discovered one another. MyHeritage DNA’s fast-growing global database helps make reunions like this possible.

The documentary follows the stories of Christine and Kim and the emotional roller coaster they experience surrounding their reunion at the same train station in Daegu, South Korea where they were both abandoned nearly 50 years ago.

The sisters had been left in the train station in a very similar way three weeks apart, but no one made the connection between the cases at the time. A woman walked into the station and asked someone to watch her baby daughter — Christine — while she went to the bathroom, and never returned. Three weeks later, the same thing happened with Kim. Each were sent to orphanages and eventually placed for adoption. It never occurred to the police that the cases were related. Christine as a toddler

Christine, now a mother of 4 from Berlin, Connecticut, explains what it would mean to her to find biological family. Christine with her children

“There’s a family photo. And the only person you can see in the family photo is you. You would feel like you’re missing out on something. Like, where is the rest of that picture? Maybe there’s bodies, but the faces are blurry. You would really want to know who those other people were in that picture.”

Her sister Kim, now a mother of 3 from Oud-Turnhout, Belgium, shares her experience. 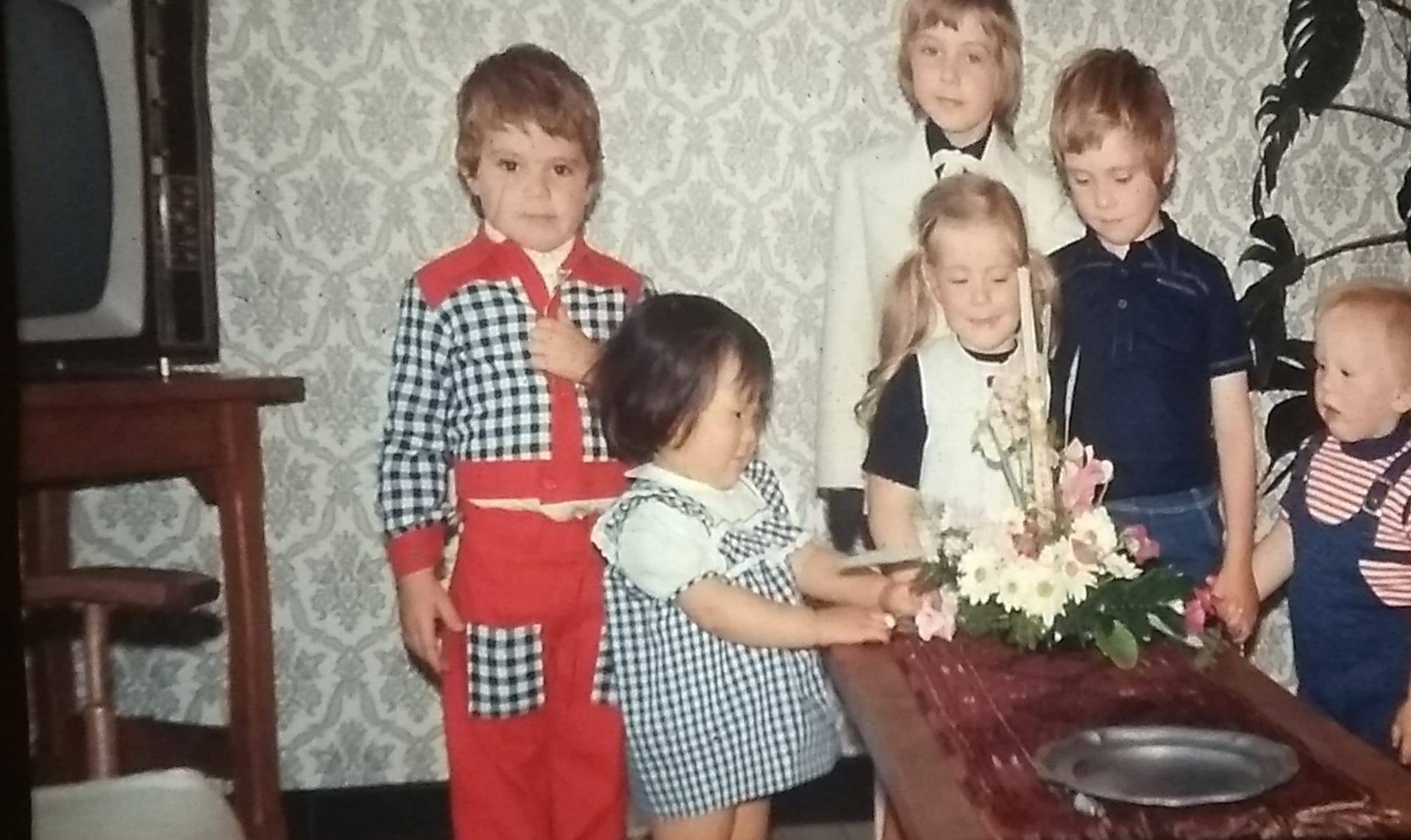 Kim as a child in Belgium with her adoptive family Kim on her wedding day

Their journeys led them to take a MyHeritage DNA test to uncover more about their origins. After a decades-long search for her family through records and a trip to Korea that proved fruitless, Christine knew that a DNA test was her only hope. Kim, by contrast, turned to MyHeritage DNA after recently battling medical issues and realizing the importance of filling in the blanks about her biological family’s medical history.

Kim will never forget the moment she received the life-changing email from MyHeritage just one month after taking the test.

“I opened it and I read ‘Sister.’” says Kim. “I said, ‘No, that can’t be.’” Her husband was sitting next to her and Kim said to herself, “Maybe it’s nothing. Go to sleep, tomorrow you will see…” But Kim couldn’t wait: she decided to contact Christine.

“I was shaking and crying,” recalls Christine. “I just couldn’t believe it.”

The two chatted all night and quickly decided that they had to meet. At long last, their lifetime search for belonging was leading toward a happy ending.

When the two finally reunite on the subway platform in Daegu, the moment is unforgettable. Their bond is instantaneous and the two have been inseparable since. Christine and Kim meet for the first time on the subway platform in Daegu where they were abandoned.

Kim and Christine flew to Amsterdam and watched the documentary for the first time at MyHeritage LIVE. After the screening, the sisters shared their experience with the audience. Roi Mandel with Christine and Kim at MyHeritage LIVE sharing their story and the making of the documentary.

The crowd was deeply moved.

Longtime genealogist Dick Eastman writes, “My eyes watered up as I watched the documentary and then listened to the two sisters describe the experience. If you or anyone you know is looking for long-separated relatives, whether it’s due to adoptions, war, calamities, or abandonment, or if the subject simply interests you, make sure you watch it. Indeed, you NEED to watch this video.”

Founder of DNAeXplain and DNA speaker and author Roberta Estes adds, “There wasn’t a dry eye in the place.”

This is the first documentary film by MyHeritage and a moving testament to the meaningful discoveries being made every day through MyHeritage. MyHeritage is honored to have facilitated this reunion and countless others.

Are you searching for biological family or have your own MyHeritage DNA reunion story? Let us know!