We are delighted to announce the addition of over 51 million new historical records to SuperSearch™ since our last update in October!

These include updates in two of our popular collections: Sweden Household Examination Books, 1860- 1947, and New York City Marriages collection, 1950 – 2017. Also included are 19 completely new collections — 14 of which are in the US Newspaper Collections.

Here’s a look at all records added since the October 2018 update.

We have recently added over 17 million new records to the Sweden Household Examination Books from the years 1930- 1947, bringing the collection total to 104,449,108 historical records. If you have ancestors from Sweden, this collection is essential as it serves as the primary source for researching the lives of individuals and families throughout the Parishes of Sweden, from the late 1600s to modern times. Collected until 1991 by the Swedish Lutheran Church, the Sweden Household Examination Books contain information about birth dates, marriages, deaths, where people had moved to or from, etc.

To learn more about this remarkable collection, check our original blog post or jump right in and search the Sweden Household Examination Books 1860-1947 collection.

This update adds 1,633,136 new historical records to the existing 7,882,294 historical records in this collection. The index now includes over 4 million marriage licenses filed at the New York City Clerk Offices in the five boroughs from 1950-2017. In addition to information on the bride and groom, the New York City Marriages collection contains additional information: Birth dates, birthplaces, occupations; whether single, widowed or divorced at the time of the marriage. It is often possible to learn more information about the bride and groom’s families with parent’s names and birthplaces. Please note that marriage licenses older than 50 years are classified as public documents and available to all researchers. Marriages of less than 50 years ago, however, are restricted and available only under certain circumstances. The West Virginia Birth Index is a compendium of 3,172,114 records from 1853-1914. Provided by the West Virginia Division of Culture and History, the index includes the name of the infant, birthplace, and names of the parents. Although earlier records show just the year of birth, later records contain the full birth dates. Images associated with the collection offer additional information about the parents such as their ages and birthplaces.

From 1853 (and sometimes as early as the late 1700s) birth records were collected by each of the 55 counties in Virginia and West Virginia, resulting in some variability in the record collection. Some counties had gaps in their records collection, privacy restrictions, or record losses depending on the year. Beginning in 1917, the record collection became more uniform as the West Virginia Department of Health Vital Registration began issuing official state birth certificates

See the collection catalog to find all details of the record collection by county.

Below is the record of Harley Orrin Staggers (1907-1991). Harley represented West Virginia’s 2nd Congressional District as he served 16 terms in the U.S. House of Representatives from 1949-1981. From the record, see that he was born August 3, 1907 in Cabin Run, Mineral County, West Virginia, to J.K. and Fannie Staggers.

Drawn from the Ohio Death Index, is the record of Roger Philip Bresnahan, a Hall of Fame Major League Baseball Player who died in Lucas, Ohio on December 4, 1944 at age 65. The 1,491,656 records in this collection include – in addition to Illinois – the INS District 9, which covered parts of northwestern Indiana, eastern Iowa, and southern and eastern Wisconsin.

The US Naturalization Records, New England, 1791-1906 collection includes 615,903 records. It is an index of naturalization documents filed in courts in the states of Connecticut, Maine, Massachusetts, New Hampshire, Rhode Island, and Vermont from 1791-1906.

Below is the naturalization record of John Muir, a Scottish-American immigrant who became a famous environmentalist and author. Known as the “Father of the National Parks”, Muir helped establish Yosemite National Park. 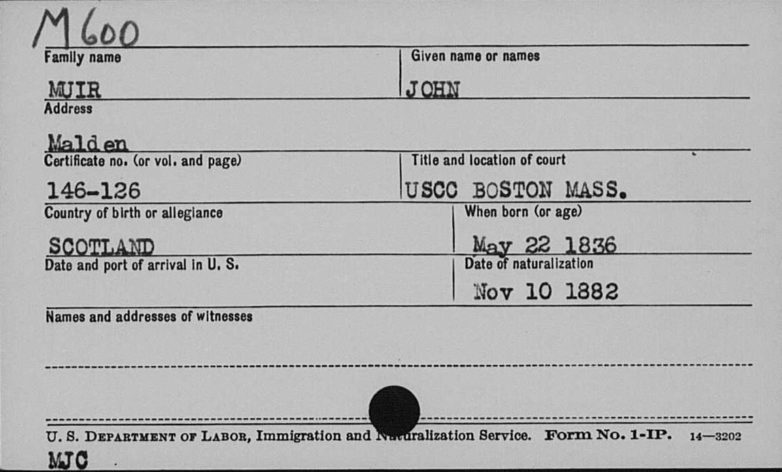 In addition to articles related to important events and activities in the communities, newspaper collections also contain birth, marriage and death announcements, obituaries and society pages.

This collection contains both the text and the scanned image of the newspaper article. Search the collection for a particular name or keyword and find a list of articles and an image of with the highlighted name or keyword. After selecting the record, you may enlarge it to full screen to zoom in and read the article from the scan of the original publication.

Drawn from the Alabama newspaper collection is the obituary of Governor Lureen B. Wallace. Born in Tuscaloosa, Alabama, Lurleen Burns Wallace (1926-1968) was the first woman to be elected Governor of Alabama. The article, from The Tuscaloosa News, pays tribute to Lurleen, who after one year as Governor died of cancer. In his eulogy of Lurleen, Rev. John Vickers shares that “Lurleen was committed to the truth that whatever proved to be the will of the Father, she would seek the power to accept.” Obituary of Lureen B. Wallace, The Tuscaloosa News, Tuscaloosa, Alabama, May 8, 1968 (click to zoom)

From our new Idaho Newspaper Collections, is an article about Picabo Street in the Sports section of the Moscow- Pullman Daily News, during the 1998 Nagano Olympic Games. On February 11, 1998, Picabo became the first US woman skier to win two gold medals since 1952.

Search the 14 new and 37 existing collections in our US Newspaper collections.

Searching all these exciting new collections is completely free and accessible through MyHeritage SuperSearch™. A MyHeritage Data subscription is required to view records from these collections, to save them to your family tree or to confirm Record Matches.

Enjoy searching these collections and let us know in the comments below what you have discovered!