The Surprising History of “Jingle Bells” If someone asked you to name the first Christmas song that comes to mind, you’ll very likely answer “Jingle Bells.” The cheerful classic has become a universally recognized icon of Christmas, right along with Santa Claus, wreaths of holly, and the colors red, white, and green.

“Jingle Bells” was written by a man named James Lord Pierpont in 1857 — but not quite in the form that we all know and love today. It was originally published under the name “The One-Horse Open Sleigh,” with slightly different lyrics, and a significantly different melody for the chorus. What’s more, the original version wasn’t an instant hit… and it had no connection at all to Christmas!

Who was James Lord Pierpont, the man behind the song? How did the simple ditty rise to such popularity after its initial obscurity — and develop its now-timeless association with Christmas? And what other legacy did James Lord Pierpont leave behind? Join us as we embark on a one-horse open sleigh ride into history…

James Lord Pierpont was born in Boston, Massachusetts, in 1822, and it seems it took him a while to find his calling as a songwriter. His father was a pastor, an abolitionist, and a poet, and James was one of 6 children.

At around 10 years old, James went to a boarding school in New Hampshire. But apparently boarding school life wasn’t quite for him. 4 years later he ran away to sea and joined the crew of a whaling ship. Then, he served in the U.S. Navy until he was 21.

After his service, he returned to New England, joining his family in New York where his father had become a pastor. James then got married and settled in Medford, Massachusetts, and had 3 children with his wife, Millicent. James’s father eventually joined him in Medford after accepting a position as minister of a congregation there.

But James didn’t stay long. In 1849, he left his wife and kids with his father in Massachusetts to seek his fortune in San Francisco during the California Gold Rush. He opened a business there and worked as a photographer — but then his business burned down.

James’s wife, Millicent, died in 1856, and his brother John — who had followed in their father’s footsteps as a pastor — moved to Savannah, Georgia to accept a position at a Unitarian congregation there. James decided to follow his brother and became the organist and music director of the church. He gave organ and singing lessons in the community as a way to support himself. It was at this point in his life that he began writing music. His first composition, “The Returned Californian,” was published in 1852, and it described his experiences with the Gold Rush and his failed business in California.

5 years later, in August 1957, James published the song that would later be known as “Jingle Bells.” This is how it appeared in its original version:

Dashing thro’ the snow,
In a one-horse open sleigh,
O’er the hills we go,
Laughing all the way;
Bells on bob tail ring,
Making spirits bright,
Oh what sport to ride and sing
A sleighing song to night.

A day or two ago,
I thought I’d take a ride,
And soon Miss Fannie Bright
Was seated by my side,
The horse was lean and lank;
Misfortune seemed his lot,
He got into a drifted bank,
And we, we got upsot.

A day or two ago,
The story I must tell
I went out on the snow
And on my back I fell;
A gent was riding by
In a one-horse open sleigh,
He laughed as there I sprawling lie,
But quickly drove away.

Now the ground is white
Go it while you’re young,
Take the girls to night
And sing this sleighing song;
Just get a bob tailed bay
Two forty as his speed.
Hitch him to an open sleigh
And crack, you’ll take the lead.

You may notice that there is no mention whatsoever of anything that has to do with Christmas in these lyrics. The song tells of a jaunty ride on a one-horse sleigh that ends in a rather embarrassing incident for the driver. It was published in late summer/early autumn, too. There was clearly no intention for the song to become associated with Christmas.

So why has it become the #1 Christmas song of all time?

What we know is that the song became popular thanks to advancing technology in the 20th century. A number of phonograph recordings were made right around the turn of the century, and when radios became widespread, these recordings — particularly the 1943 version by Bing Crosby and the Andrews Sisters — were played often. The Bing Crosby version was recorded during the Christmas season, and it was probably that, plus the winter imagery, that sealed the song’s fate as a Christmas classic. The melody of the chorus is strongly reminiscent of the sleigh bells mentioned in the song, and perhaps these elements created a strong association with the imagery of Santa’s sleigh.

But back in the late 1850s, there was no hint of the song’s bright future. It wasn’t received with particular enthusiasm, and James continued his work as usual. Around the time “The One-Horse Open Sleigh” was published, James remarried and started a new family.

As the winds of the Civil War began to brew, the Unitarian Church where James and his brother worked — unpopular because of its abolitionist position — closed. His brother moved back up north, but James remained in Savannah with his family. He ended up joining the Confederate Army as a company clerk and even wrote some music for the Confederacy. Meanwhile, James’s father served as a chaplain with the Union Army and later worked for the Treasury. Theirs is just one example of the many families that were on opposite sides of the Civil War.

James continued to teach music throughout the rest of his life. He died at his son’s home in April of 1893, never knowing that his cheerful little ditty about a one-horse sleigh would later become one of the most widely recognized popular songs in the world.

The phenomenon of “Jingle Bells,” however, was something that James Lord Pierpoint never had the opportunity to realize in his lifetime. The Research team at MyHeritage wondered about the rest of his legacy: his descendants. Where are they today and what do they know about their ancestor’s legacy?

The Research team built a family tree for James and began searching for records that mention him. They found him in the 1850 census, listed as living with his parents, Reverend John and Mary, his siblings Mary, John, and Joanna, and his first wife — Millicent — and their children, Mary and John. They also found a listing of the birth of James’s son, John, on August 11, 1849, in the Medford birth records: Knowing John’s date of birth, they were able to locate him on additional U.S. censuses, and find his gravestone: From there, they were able to trace the family down an additional generation: John’s son, Dr. David Cowee Pierpont. David was listed in the 1930 census with his wife Anna and their four sons, living in Ironwood, Gogebic, Michigan. 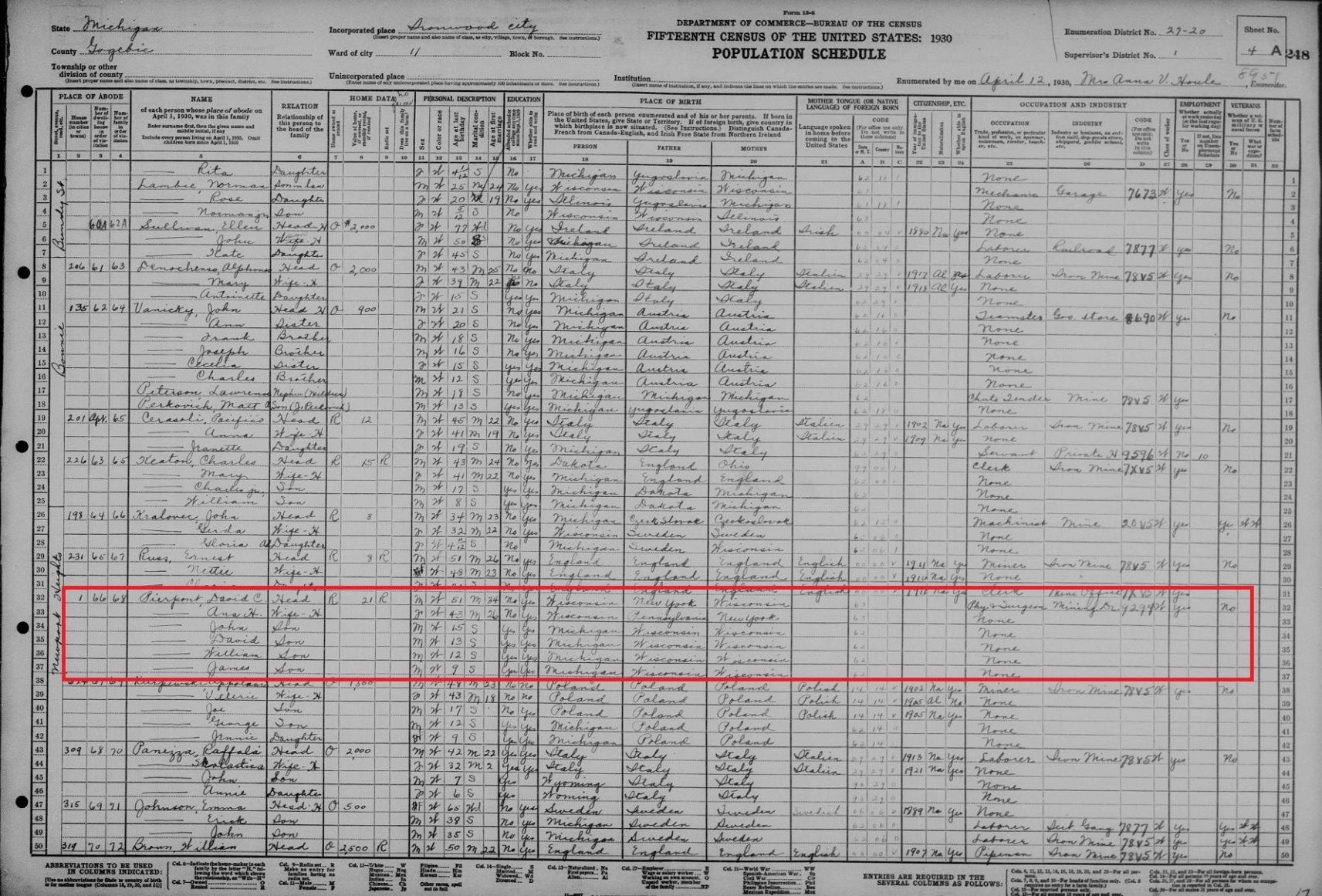 They also found David’s World War I draft registration. The record says that David was a physician and surgeon at the Newport Hospital in Ironwood, and that he was tall and slender with brown eyes and brown hair. They even found an obituary for David, who died suddenly of a heart attack while examining patients: They also found him in the 1940 census, married to his wife Helen and living with their baby son, David, in Pittsfield, Washtenaw, Michigan. John is listed as an intern physician. That is what led them to his son, Mutt (Matthew) Pierpont: the great-great-grandson of James Lord Pierpont, composer of “Jingle Bells.”

We reached out to Mutt Pierpont to share our research with him. He was amazed to see the records that proved his connection to the illustrious song-writer.

Every year, around Christmas time we would hear the song on the radio and it would be a great conversation starter with friends. It’s great to be reminded about it every year as the holiday season comes around. With my own children, aged 12 and 14, every Christmas we make an effort to point out to them that the song came from their great-great-great grandad. Mutt was appreciative of what the MyHeritage Research team found.

MyHeritage uncovered details about who he was and about his life that I wasn’t fully aware of that was fascinating. When it comes to family history, most people know a lot about their parents and grandparents but we don’t always know the little details about our ancestors and so to see new information about his personality and life in general was amazing and makes me feel a greater connection to my great-great grandpa.

Does your family have a particular affinity for a holiday album? We’d love to hear about it! Let us know in the comments.