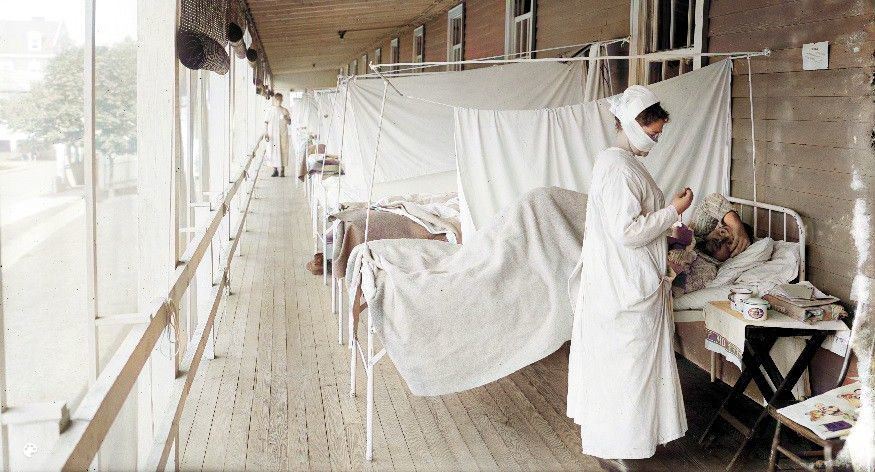 Many have drawn the parallel between what we are going through today and the Spanish Flu of 1918. Thankfully, we’ve had 100 years of progress in science and medicine to better prepare us to deal with a pandemic of this magnitude, and we’re unlikely to see the kind of devastation caused by the Spanish Flu.

That said, there is so much we can learn from the way people who survived the Spanish Flu and other crises coped with their challenging circumstances. Our ancestors survived pandemics, wars, famines, and natural disasters — who better to look to for guidance during times of trouble?

Below are some of the ways our ancestors coped with the Spanish Flu and other difficult circumstances — lessons we can apply to the challenges we are facing today.

The healing power of food

For many of us, good food is the ultimate comfort. We prepare food for others to nurture and care for them, and eating good food makes us feel nurtured and cared for, too. Many people in quarantine are using their extra time at home to reconnect with their domestic sides and try their hands at baking and cooking.

But back in the early 20th century, food preparation was more of a necessity than a pastime — and people who lived with scarcity were forced to be creative if they wanted to prepare their usual comfort foods. One popular invention during the Great Depression was a chocolate cake known as “crazy cake” or Depression cake. It involved minimal use of ingredients such as butter, milk, eggs, and sugar, which were a luxury for many during that period. Inventive housewives also created concoctions such as mock apple pie (using crackers soaked in a sweet syrup to stand in for apples) and mock fish cakes (using potatoes). Illustration from, “Favorite recipes that save time and money,” (1919)

Today, we see a similar phenomenon: an overabundance of aging fruit languishing on the counter has led to a huge resurgence in popularity of homemade banana bread. Sourdough baking has also seen a comeback, partly because it’s harder to acquire fresh baked goods due to disrupted supply chains and closures, and partly because people have more availability to engage in food preparation processes that may have been too involved or time-consuming for their previous busy schedules.
Aside from ingenuity and improvisation, another thing we can learn from our ancestors’ Depression-era baking adventures is how hard they tried to maintain a sense of normalcy, and to enjoy life, even during the hardest times.

In the early 20th century, germ theory was a relatively new concept, and medical authorities were only just beginning to learn about the importance of hygiene in fighting disease. Antibiotics had yet to be discovered when the Spanish Flu broke out.

And yet, when we take a look back at newspaper clippings from that period, we find that the advice medical authorities gave still holds up today: There was some confusion at first about whether the public should be wearing masks. Many claimed they were ineffective in preventing the wearer from contracting disease, and that the shortages meant that protective equipment should be reserved for medical personnel. But later, many authorities changed their minds about masks, seeing that widespread wearing of masks could help prevent the spread of the disease. But then, as now, just because you had to wear a cumbersome and awkward piece of cloth over your face didn’t mean you couldn’t look good doing it. In our California Newspaper collection, we discovered an article about how women would creatively use veils to hide their Influenza masks. This article printed in Bakersfield in October 1918 states that women in the city were “draping themselves in face-enveloping veils, covering the masks very effectively and even enhancing their natural good looks.” It gives an example of a woman wearing a dark blue suit with a white vestee and a long white veil “draped over a chic little hat, almost completely concealing the disfiguring gauze protector.”

Around a month ago, the President of Slovakia, Zuzana Čaputová, captured the attention of many fashion journalists with the classy rose-colored dress paired with a matching face mask she wore to a swearing-in ceremony. With use of masks becoming more widespread, DIY-ers are producing cloth masks in cute patterns, some even selling their products to others who are tired of the boring surgical masks and want something reusable for day-to-day use.

Even during the suffering and fear of the Spanish Flu, many people acted selflessly, volunteering their time, possessions, and efforts to help others weather the crisis.

Just as some have volunteered to sew masks to donate to medical professionals during the coronavirus crisis, many women volunteered to help make masks to protect people against the flu. This article applauds a group of women who sewed an astonishing 2,175 masks in a single day.

Coming back to the theme of the healing power of food, on that same day, The Daily Californian also reported that a box of oranges had been donated to a Red Cross hospital so that the sick patients receiving care there could enjoy a “refreshing treat.” We also found this heartwarming article about “Mother” Burdick who insisted on dishing out as many cups of hot chocolate as she could to soldiers setting off to serve in the war in France:

They say that laughter is the best medicine, and though it may not cure a virus on its own, it can certainly help raise our spirits. Silly memes and jokes about the coronavirus situation are popular now on social media precisely because being able to laugh about the situation makes us feel so much better.

Believe it or not, people have used humor as a coping mechanism even in the darkest of times. Researcher Dr. Chaya Ostrower interviewed 84 Holocaust survivors focusing on the use of humor. She found that many of them joked and tried to make light of even the most horrifying situations. One of her interviewees is quoted as saying, “When I was interviewed for Spielberg and they asked me what I thought was the reason I survived, they probably expected me to answer good fortune or other things. I said that I thought it was laughter and humor — not to take things the way we were living but to dress them up as something different. That was what helped me.”

It appears that people didn’t lose their sense of humor during the Spanish Flu, either. The newspaper cartoon widely considered the first of its kind, Mutt and Jeff, ran this strip in August 1918:

This, too, shall pass

Another important thing we gain from looking back at how our ancestors coped with adversity is a healthy dose of perspective. We see that throughout history, even the toughest times that seemed like they would never end did pass eventually.

And while this crisis has exposed our vulnerability and showed us how very fragile our bodies are, we can also see — both today, and in the stories of our ancestors — how invincible the human spirit can be.

So let’s take this opportunity to connect to our ancestors’ strength, and let it be our inspiration as we wait for this, too, to pass.

Take a look at our Newspaper collections and discover more about your ancestors’ lives.