What’s in a French Surname? MyHeritage recently added an important collection of historical records from France, opening new horizons for genealogists with French heritage. The France, Nord Civil Marriages collection contains not only details about brides and grooms registered from 1792–1937, but also details on their parents. If your ancestors hail from this magnificent region so steeped in history and culture, you likely have some French ancestral surnames in your family.

Search for your French surname in the France, Nord Civil Marriages collection!

The word “surname” actually derives from the French surnom, derived from sur (“above” or “over”) and nom (“name”). Surnames were uncommon in ancient times, probably because there wasn’t much of a need for them. Social circles and communities were much smaller, and people didn’t move around very much. As the world developed and the population of Europe grew, the need for a way to distinguish between the various Jeans, Pierres, and Michels emerged. The earliest documented use of surnames in France was during the 11th century, but they did not become common until around the 14th century.

French surnames normally fit into one of the following categories:

One common type of surname across cultures is the patronymic or matronymic surname: a surname derived from the first name of the person’s father or mother respectively. Patronymic names are more common, since in general, matronymic names were only used when the father’s name was unknown.

A patronymic or matronymic surname might simply be the father’s or mother’s given name, like Bernard, Martin, or Richard. It also might have a prefix, such as de, des, du, lu, or the Norman fitz (for example, de Gaulle or Fitzgerald), or a suffix that means “little son of,” such as -eau, -elet, -elin, -elle, and so on. 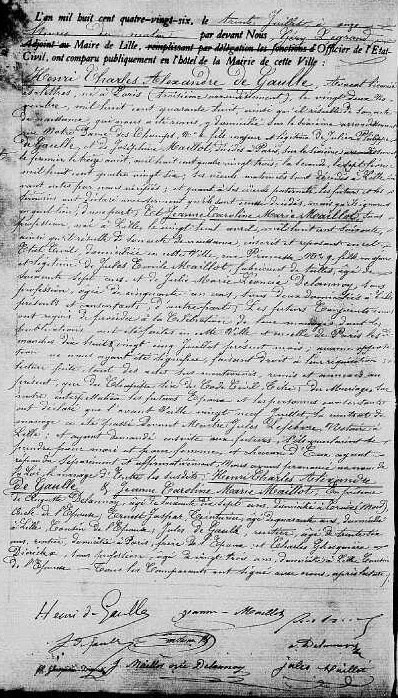 Another common type of surname is the occupational surname: a surname based on the person’s profession or trade. For example, Lefebvre (meaning “craftsman” or “smith”), Leclercq (“the clerk”), Lemaire (“the mayor”), Carpentier (“carpenter”), or Dufour (“of the oven,” meaning a baker).

A surname might also be derived from the description of a unique characteristic of the individual. For example, Legrand (“the large one”), Moreau (“dark skinned”), Petit (“small”), or Caron (“beloved”).

Rose Caron, a famous French opera singer, in the role of Salammbo, by Léon Bonnat,1896

These names are based on a place—often a former residence. For example, if a man named Pierre moved to a town from Lyon, the people in the new town might call him Pierre Lyon or Pierre de Lyon. Examples of this from our France Nord collection include Delannoy (“of Lannoy”), geographical name might also be a description of where the person lived, such as Fontaine (meaning “fountain” or “spring”). These names might also have a prefix such as de, des, du, or le to indicate “of.” For example, Dubois (“of the wood”), Dupont (“of the bridge”), Dumont (“of the mountain”), Descamps (“of the fields”), or Delattre (“of the churchyard”).

Sometimes, a second surname was adopted in addition to an original surname for various reasons. These surnames included the word dit, which means something like “that is to say.” Gustave Eiffel, architect of the Eiffel Tower, was born Alexandre Gustave Bonickhausen dit Eiffel. He formally changed his surname to Eiffel in 1880. Before the French Revolution, new recruits to the military were required to adopt a nom de guerre, literally a “war name,” under which they would serve. This was a predecessor of military identification numbers. Some soldiers went on to use their noms de guerre in civil life as well.

Do you have a French surname in your family or any French ancestors? Start your surname research with SuperSearch™!