Born in Germany just after World War I, Irma was raised by her aunt. After World War II, she managed to escape East Germany as a young mother herself, and soon immigrated with her four children to North America, where she has lived ever since. Today, she lives in California.

Irma searched for her biological family for more than six decades without success — and then, thanks to a MyHeritage DNA test taken by her granddaughter, she found her long-lost brother. She was able to celebrate her 99th birthday together with her family and also her newfound great-nephew, Franz, who made the visit to California from Germany as a surprise — the first extended family member Irma had met in over five decades.

Irma’s granddaughter, Christa, the family genealogist, decided to both build a family tree on MyHeritage as well as take a MyHeritage DNA test. When her DNA results came in, she discovered a second cousin living in Germany: Franz Friedrich. 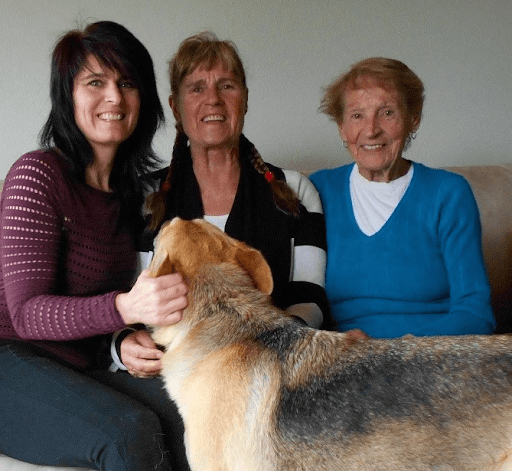 Franz had also been researching his family history, trying to determine if there was truth to the rumor that his great-grandfather had another child — a sibling to Franz’s grandfather, Werner. After connecting with Christa, Franz bought a MyHeritage DNA test for Werner, and Christa did the same for her grandmother Irma. The results confirmed what they had deduced through comparing notes: Werner was Irma’s brother. After 80 years of being apart, they had finally found each other.

“I couldn’t believe it,” says Irma.

“I didn’t think we had any relatives,” says Angelique, Irma’s daughter. “I think I was pretty poor because of it.”

They began to talk on Skype, “I never thought I’d get to see him in my life,” says Irma.

“We were prepared to have my mom come up and be surprised by Franz and his sisters,” says Angelique speaking about the birthday surprise. “It was beyond my dream, the way that Mom reacted.”

“When I saw him that morning, I nearly passed out,” says Irma. “I’m so happy he is here.”

“I think she was excited to find out now that she also has a family,” says Angelique. “I was listening to Franz tell her, ‘Yeah, that’s your brother, and that’s your brother’s wife, and those are your sisters’… she said, ‘This has been the best birthday present ever.’”

“MyHeritage was the factor in reuniting us with people we didn’t even know,” she adds.