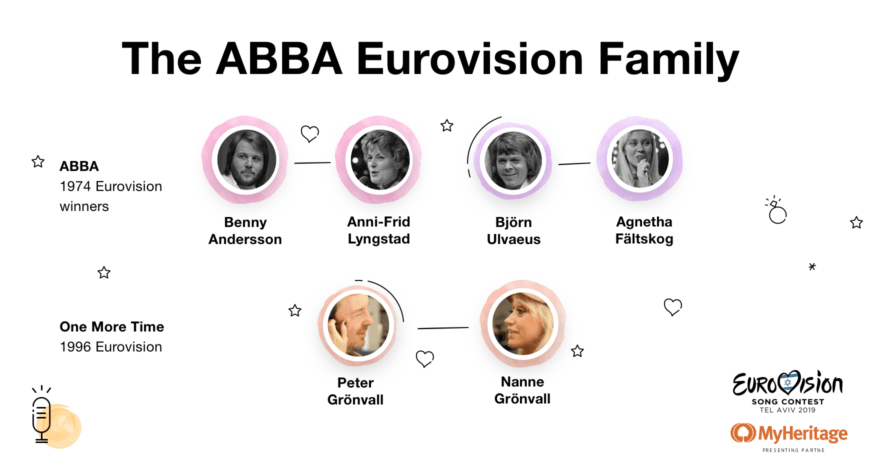 Four decades on, the music and superstar power of the band ABBA continues to delight fans worldwide. At the Eurovision’s 50th anniversary celebration in 2005, the band’s song “Waterloo” was voted best song in contest history.

While many may think they know everything about the group’s two power couples, far fewer fans are aware that their legacy of music and love inspired their children to reach Eurovision fame. ABBA’s legendary hits are rooted in the love stories and the real-life marriages of Benny Andersson and Anni-Frid Lyngstad, and Björn Ulvaeus and Agnetha Fältskog. With their onstage chemistry, the sparks between ABBA’s couples elevated their love songs to a whole new dimension. It was a match made in musical heaven when Björn, 23, a crooner for the musical group Hootenanny Singers, and Agnetha, 18, a singer-songwriter, met and fell in love in 1968. After a two-year courtship, they married in 1971, with ABBA bandmate Benny Andersson playing the organ at the wedding. Their love blossomed with two children, Linda and Peter, and then faded in the late 1970s, leading to an eventual divorce in 1980.

The peak of their marriage coincided with the meteoric ascent of ABBA, launched by their triumph at Eurovision 1974. Their love was evident during the performance, giving urgency and meaning to the lovestruck lyrics of their winning song, “Waterloo”: “promise to love you forever more.” Though their love did not last, it did help propel ABBA to victory at Eurovision and to a smashing commercial success in the ensuing years.

Benny and Anni-Frid’s love story took center stage at Eurovision 1974 along with Bjorn and Agnetha, but the roots of their romance were sown five years earlier at the 1969 Melodifestivalen, Sweden’s national Eurovision finals. While Benny and Anni-Frid did not have children together, they each have two children from previous marriages.

Before the couple met, Anni-Frid had married Ragnar Fredriksson, and had two children. Benny’s two children, Peter and Heléne, were from a previous marriage to Christina Grönvall.

Both relationships ended and led to the eventual disbandment of the group in 1982, but the message of sharing a love story onstage, and with an audience, was transmitted to the next generation.

And The Beat Goes On

Peter Grönvall, Benny Andersson’s son, has said, “Growing up with Benny has left its mark.” Having one of the most famous musicians in Sweden as a father leaves some big shoes to fill. Earlier in life, Peter planned on becoming an astronomer, but was bitten by the musical bug when he sat in front of the family’s piano. Though shying from the spotlight, Peter performed on the Eurovision stage, just like his father. His band, One More Time, came in third at the 1996 Eurovision Song Contest. One year earlier, the group nearly made it to Eurovision, coming in as the runner up at Melodifestivalen. Peter has since taken on a more supportive role to Nanne, who continues to appear on stage and sing, while Peter continues to exercise his musical muscle as a producer. Unlike his father, however, Peter’s relationship has lasted. He and Nanne have been together for over 32 years, and have worked together for 27 of them. Peter isn’t the only “ABBA child” to inherit the musical gene. The generational bond continued when Agnetha Fältskog recorded a children’s album with her son, Christian, in 1987. While the song didn’t achieve Eurovision fame, it won accolades within Sweden.

They say that love conquers all, and with ABBA, true love also conquers the pop charts. Having sold over 380 million albums and singles worldwide, ABBA’s onstage-offstage romance seems to be the secret sauce to their success. Their enduring Eurovision legacy of love and family is evident in their children, Benny’s son Peter and Agnetha’s son Christian. Will the ABBA love dynasty continue? Mamma Mia, we’ll have to wait and see!