Genotypes are the DNA that code for the phenotype. Have you ever thought about how a person might have a blue-eyed parent and a brown-eyed parent and yet have only brown eyes themselves? DNA is inherited from both parents, so how can a person have eyes that only match one?

Parents don’t pass down eye color — they pass down an allele. Together, the allele from your mother and the allele from your father are your genotype. Your genotype codes for your phenotype — the trait we can actually see. For example, if the blue-eyed parent passed down a blue allele, and the brown-eyed parent passed down a brown allele, the child’s genotype will be blue-brown, and his or her phenotype will be brown. How do we know that the child’s eyes will be brown?

Some alleles are recessive, and others are dominant. In this case, blue is a recessive allele while brown is dominant. When you get different alleles from each parent, you are heterozygous for that trait. When you get the same allele from both parents, you are homozygous for that trait. (For a review of terminology, see DNA Basics Chapter 4: A Glossary of Terms.) Because blue is recessive and brown is dominant, any blue-brown heterozygote will almost definitely have a brown-eye phenotype, and the person’s eyes will be brown.

To map the possible genotypes and phenotypes you can inherit from your parents, you can use a tool called a Punnett square. Conventionally, upper case letters are used to indicate dominant alleles and lower case letters are used to indicate recessive alleles. Below is a Punnett square mapping the possible genotypes for a person with a homozygous blue-eyed parent and a heterozygous brown-eyed parent. 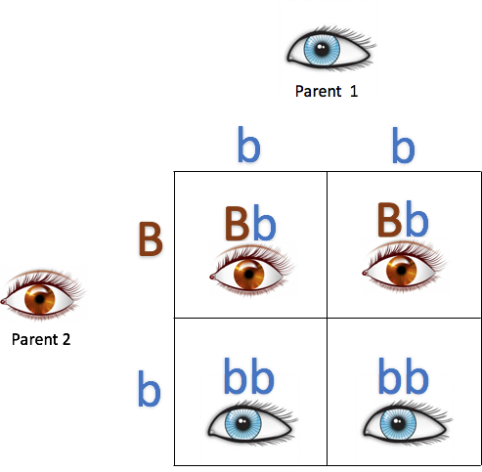 Punnett square showing the possible genotypes and phenotypes a person can inherit from a homozygous blue-eyed parent and a heterozygous brown-eyed parent.

Here is a list of blood type inheritance possibilities:

A table of blood type inheritance patterns. Note that there is no significance to the order of the alleles within a genotype, e.g., AB and BA are exactly the same genotype.

In the eye color example, you don’t need a DNA test to tell you your eye color! You can see in the mirror whether you have brown eyes. What you can’t see in the mirror is your genotype. Similarly, while you might have some characteristics that are associated with certain ethnicities, the only way to find out all of the ethnicities in your DNA that you inherited from your parents is to take a DNA test.

Order a MyHeritage DNA kit to find out the hidden ethnicities passed down to you by your ancestors — you may be surprised by what you uncover!