We are delighted to announce a major addition to the MyHeritage DNA Health test — 9 new health reports that provide important insights to our users.

In May 2019, we launched the MyHeritage Health test, which offers new dimensions of genetic insight to enrich your life, enlighten you about your health, and help you make informed lifestyle choices. At launch, we promised to continue expanding the scope of the health reports, and the addition of these 9 new reports is the first of many updates that we intend to release in the future.

The 9 new reports include a polygenic risk score for evaluating genetic risk for high blood pressure, 3 reports that estimate genetic risk for developing a disease, and 5 carrier status reports that indicate if an individual is a carrier of a disease that may be passed from a couple to their children if both partners are carriers for the same condition.

MyHeritage Health is off to a great start

Since its launch six months ago, a large number of people have already benefited from the new MyHeritage Health test, either by purchasing the kit or by upgrading their genealogy-based MyHeritage DNA test to receive health reports without the need for a new DNA sample.

The MyHeritage Health test has received extensive praise from users, who are using it to gain further insight into their genetics and make proactive choices regarding their health. We recently received a moving testimonial from one of our customers, who thanked us because, as he put it, MyHeritage saved his daughter’s life. This was achieved by detecting a rare BRCA variant that only MyHeritage tests for among the major consumer health tests, which indicates a significantly increased risk of developing breast cancer. It is successes like these that make us even more determined to continue our mission to raise awareness of genetic health risks and provide insights on significant medical conditions to the public.

Details about the new reports You can learn more about polygenic risk scores in this MyHeritage blog post by Jessica Greenwood, MS, LGC.

Monogenic conditions are caused by a change in a single gene. Following this latest release, MyHeritage now offers a total of 14 monogenic reports. The new PALB2-associated breast cancer report examines variants in the PALB2 gene, which is linked to a type of hereditary breast cancer. The presence of a PALB2 variant notably increases an individual’s risk for developing breast cancer and has also been associated with increased risk for ovarian and pancreatic cancer. Women who have PALB2 mutations are encouraged to pursue regular screening, since early detection significantly increases the chances of successful treatment. HIV-1 is a virus that attacks the body’s immune cells that fight infection. Left untreated, the virus can destroy the immune system, leading to the disease called AIDS. Susceptibility to HIV-1 infection is influenced by the presence or absence of certain protective variants. Our new report identifies the presence or absence of the CCR5 variant, which is most common among people of Northern European descent. Individuals with one copy of the protective CCR5 variant have some level of resistance to HIV-1 infection, while individuals with two copies of the variant are highly resistant to becoming infected with the virus. The susceptibility to HIV-1 infection report is exclusive to MyHeritage. Malignant hyperthermia is a genetic condition that causes a rapid rise in body temperature and severe muscle contractions while under general anesthesia. If given anesthetic drugs, people at risk for malignant hyperthermia can experience life-threatening complications. Individuals who are at increased risk for this condition may never know they have it until they undergo surgery or have general anesthesia. Knowing about this genetic predisposition enables medical teams to take the necessary precautions to avoid severe reactions during surgery. When two individuals who are carriers for the same genetic disease have a child, that child is at risk for inheriting the disease or being a carrier themselves. MyHeritage now offers the following new carrier status reports: The 9 new health reports, together with the 27 original reports, are included for anyone who purchases the MyHeritage Health test or upgrades their MyHeritage DNA kit to receive health reports going forward. Users who have previously purchased the Health kit or the Health upgrade and who have a Health subscription will receive an email inviting them to view their new reports at no additional cost. They can also access the reports by clicking on the Health tab on the navigation bar. An intro wizard on the main health page describes the newly added reports to users who have already received their health results. The new reports are available to MyHeritage Health customers worldwide. Users who reside in the United States and have purchased the Health subscription will receive their new reports in the near future.

Remember, MyHeritage health reports do not tell you whether you have or will develop a condition. They only reflect your genetic risk for developing a condition. If a specific report is excluded from your results, you’ll find an explanation why at the bottom of the genetic risk overview page.

The 9 new health reports are the first of many planned additions to the MyHeritage Health test. A second set of new health reports is slated for release in early 2020, and will include an additional PRS report, plus more genetic risk and carrier status reports. Our world-class Science team is working hard to continue bringing our users a broad array of new health insights to enhance their future health and quality of life. This makes the MyHeritage Health test one of the most rapidly evolving genetic health tests on the market.

The MyHeritage Health test consists of a simple cheek swab — no blood or saliva required. It’s easy to use and takes just 2 minutes. The test includes Sanger sequencing to validate positive results, to substantially reduce the risk of false positives. It makes a thoughtful gift for your loved ones this holiday season, as well as a gift to yourself. It also includes all the genealogical features of the MyHeritage DNA test: ethnicity estimates and finding relatives through shared DNA. Order the MyHeritage Health test, or if you have tested with MyHeritage DNA before and wish to add health reports without sending in a new DNA sample, upgrade your kit to health. 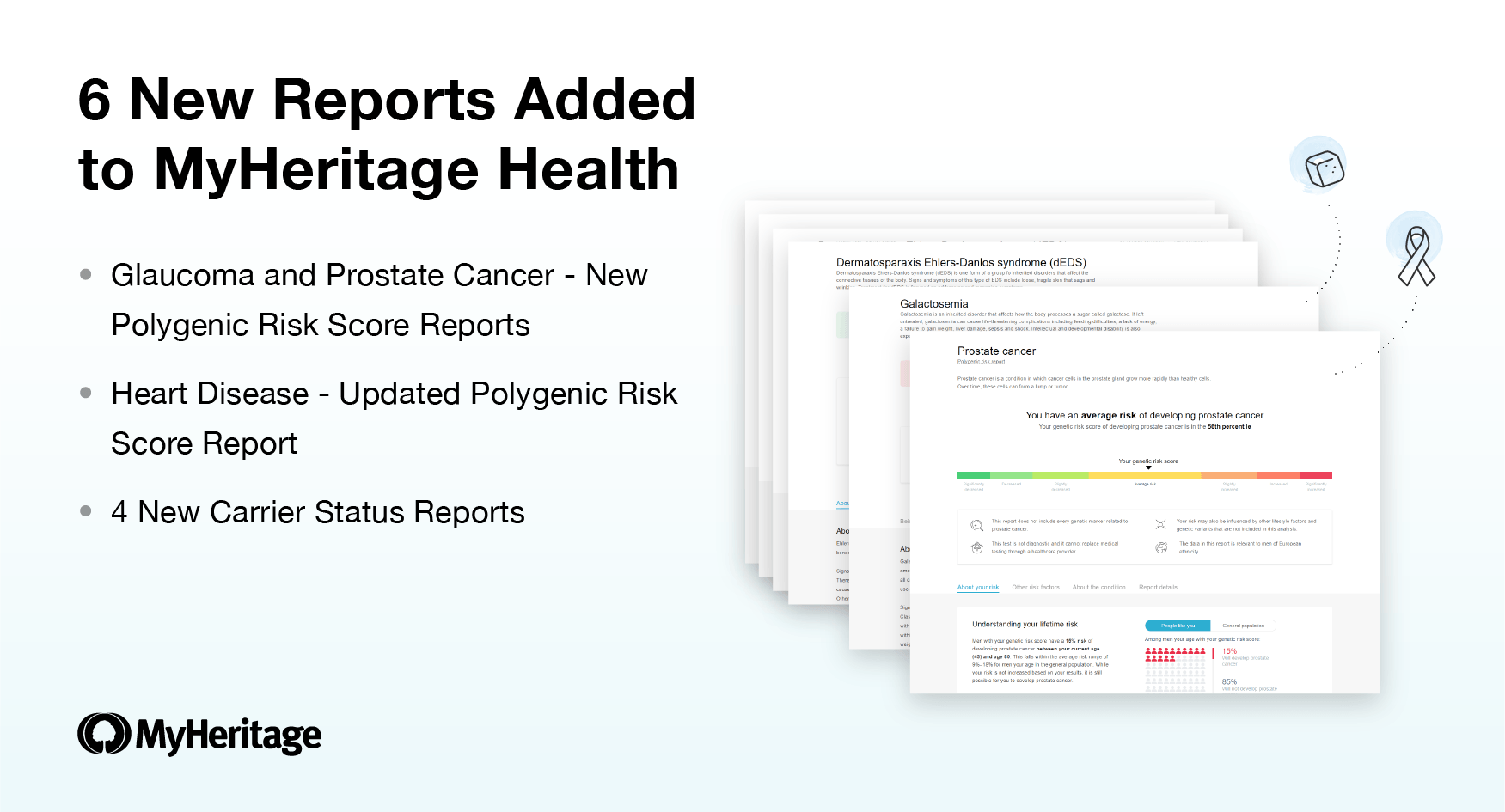