What did a lamb stew from ancient Babylonia taste like?

Kind of like a lamb stew from present-day Iraq, as it turns out.

A team of international researchers are working on reconstructing ancient recipes recorded on 4,000-year-old clay tablets from Yale University’s Babylonian collection. The tablets, written in cuneiform, contain a few dozen recipes in various levels of detail. Scholars from various disciplines are working together to reproduce these ancient delicacies for our modern palates to enjoy.

Nawal Nasrallah, a culinary historian and Iraqi cuisine expert involved in the project, said she was surprised to find that the lamb stew — such a staple in Iraq today — was also a staple in the region 4,000 years ago. “It is really fascinating to see how such a simple dish, with all its infinite variety, has survived from ancient times to present,” she told BBC Travel, “and in those Babylonian recipes, I see not even the beginnings; they already had reached sophisticated levels in cooking those dishes. So who knows how much earlier they began?”

The lamb stew recipe is simple and succinct: “Meat is used,” read the tablets. “You prepare water. You add fine-grained salt, dried barley cakes, onion, Persian shallot, and milk. You crush and add leek and garlic.”

This recipe reminded Nasrallah of pacha, an Iraqi stew her mother used to make. The barley cakes are crumbled into the liquid the way we might today use croutons, or sop up the broth with bread. Scholars had to experiment with amounts and proportions to come up with a modern version of the recipe. 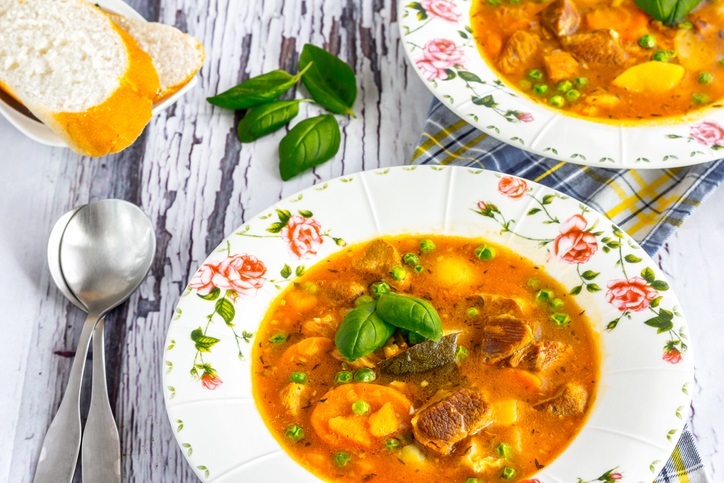 One striking aspect of the research is the fact that some of the recipes were local, while others were adopted from neighboring cultures. Gojko Barjamovic, a Harvard University expert on Assyriology, told the BBC that “there is a notion of ‘cuisine’ in these 4,000-year-old texts. There is food which is ‘ours’ and food that is ‘foreign.’ Foreign is not bad — only different, and sometimes apparently worth cooking since they give us the recipe.” For example, some of the dishes contain dill, an herb that was hardly used in Iraqi cuisine, but was quite common in Iranian cuisine. Barjamovic says that perhaps the ancient Babylonians associated the flavor of dill with their Elamite neighbors the way we associate fresh coriander with Latin American dishes.

Nasrallah also points out that certain culinary trends, such as the concept of serving stuffed foods, seem to have survived over the millennia. The recipes in the tablets contain a sort of pot pie made with layers of dough and fowl covered in a cream sauce. Apparently, the dish was served with a sort of crusty lid, which was opened to reveal the meat underneath. Nasrallah says this technique was also used in recipes from a 10th-century cookbook from Baghdad, Kitab al-Tabikh. “Today, in the Arab world and particularly in Iraq, we pride ourselves in stuffed dishes like dolma,” Nasrallah told BBC. “In this way, I was really fascinated by the continuity of the cuisine and what has survived.”

The recipes from the Yale University Babylonian collection now join the ranks of other, sometimes older, recipes we inherited from other ancient cultures. The Greek philosopher Herodotus, for example, describes a Scythian method for preparing stew from around 8000-4000 B.C.E., involving boiling meat in an animal paunch. Tamales — dough parcels stuffed with meat, vegetables, or fruits — have been consumed in South America since 8000 B.C.E. Archaeologists have discovered evidence going back as far as 2000 B.C.E. of ancient Greeks preparing a simple cheesecake from cheese, honey, and flour.

While the availability of various ingredients via global trade routes and culinary trends have changed a lot about what we eat over the centuries, it’s fascinating to see how much remains the same. As anyone who reminisces about the delicacies from their grandmothers’ kitchens knows, sometimes the oldest, tried-and-true recipes are the best ones, no matter how simple — and that seems to hold true even going back four millennia.

Does your family prepare a lamb stew like this? What are some of the oldest recipes you inherited? We’d love to hear in the comments!