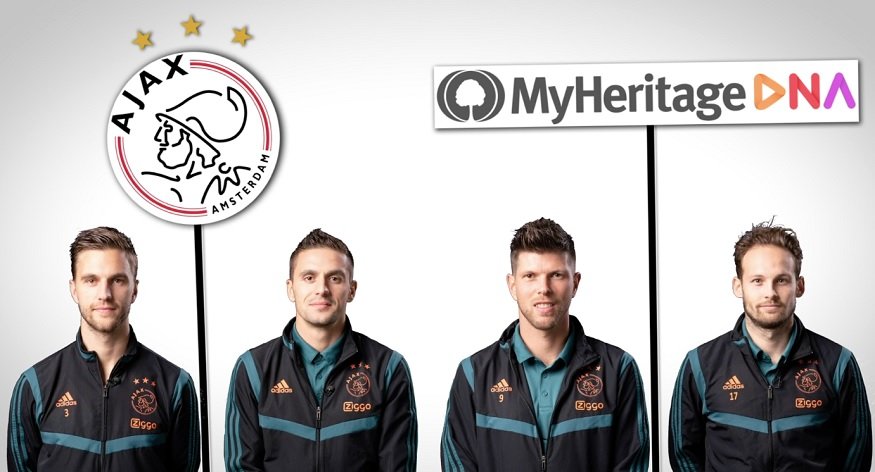 We recently announced a collaboration with the world-famous football club Ajax from Amsterdam to provide the players with fascinating discoveries about their family history. We are excited to be able to share their MyHeritage DNA results now!

Daley Blind, Joël Veltman, Dušan Tadić, and Klaas-Jan Huntelaar did a MyHeritage DNA test to find out more about their ethnic roots and where their ancestors come from. Their eagerly awaited results have certainly delivered some surprises!

View the reactions and results of the players in this video:

Daley Blind spent part of his football career playing for England. It turns out that he has a whopping 61.4% of English DNA. He was also very surprised to learn that his result also shows some African DNA. Ajax plays an important role in Daley Blind’s family heritage. His father, Danny Blind, was also associated with Ajax as a professional footballer for a long time. The MyHeritage research team discovered that this loyalty and dedication are values ​​that can be traced back to his ancestors.

The research team found this historical document from Daley’s great-grandfather, Dirk Franciscus Polderman. He worked as a pipe turner at the Royal Society De Schelde (KMS). For his many years of loyal service, he received a silver medal and was knighted in the Order of Orange-Nassau: Joël Veltman’s results show that he has the most diverse background, with 6 different ethnicities. Veltman’s relatives can also be found all over the world, with up to 3643 matches in 35 countries! A Veltman family reunion would be quite an international experience. Veltman’s Asian roots can be explained by the MyHeritage research team’s findings from his family history. His great-grandparents arrived in the Netherlands in 1935. They lived for five months in the Goudenregenstraat in The Hague, and then returned to Indonesia. This is a photo of the neighborhood where his grandmother Sylvia lived at the time: The Goudenregenstraat in The Hague at the time that Veltman’s grandmother lived here. Perhaps she regularly visited the pharmacy that appears in the photo (on the right) or rode the tram (on the left).

While Dušan Tadić’s roots are mainly in the Balkans, he is also 17.4% Greek and Southern Italian. Greek is relatively common in the Balkans, because Greek traders have been traveling and settling there for centuries. However, there was one surprise in Dušan’s results: he has 5.8% Finnish DNA! Below is a photo of his great-grandfather Ilja Radakovic, taken in 1921. He owned a piece of land in the Bačka region — located in northern Serbia — and was honored by King Peter I. His name appears on the monument pictured below as a founder of the village of Bački Sokolac. Right: Ilja Radakovic, Dušan’s great-grandfather. Left: the monument with Ilja’s name on it

Klaas-Jan Huntelaar’s results shows that his roots are 100% European: he has 59.5% Scandinavian DNA and 40.5% English DNA. Klaas-Jan Huntelaar’s ancestors were known for their creativity and craftsmanship. Below is the marriage certificate of his great-great-grandfather, Dirk Adrianus Huntelaar, Senior. The document mentions his profession: furniture designer. Dirk’s father, Baltus, was an upholsterer, and his father-in-law, Hendrik van Zwieten, was a carpenter. Hendrik’s father was the Dutch painter Willem Gerrit van Zwieten. These four Ajax players have each discovered their own unique blend of ethnicities. Would you like to learn more about the origins of your ancestors, too? The MyHeritage DNA test is now available at a special price. It is an ideal Christmas gift. Give your family and friends the unique experience Ajax players enjoyed. Order your DNA kit today.