Not long ago, we put out a call for family photos that capture a personal experience of historic moments: personal family photographs of critical events in history. Among the responses were two incredible photographs, one from Julie Boardman of Australia and one from Lou Daly of Washington, that captured key moments in the history of aviation.

Julie Boardman from Australia shared a photo her grandmother snapped 94 years ago of Bert Hinkler, famous Australian aviator. Hinkler was a pioneering aviator and set many world records, including the first ever solo flight between England and Australia in February 1928 and the first solo flight across the Southern Atlantic in 1931. Tragically, he died in 1933, at the age of 40, when his plane crashed into a mountain in Tuscany while trying to set another world record.

Julie shared this photo of Hinkler taken in June 1928: 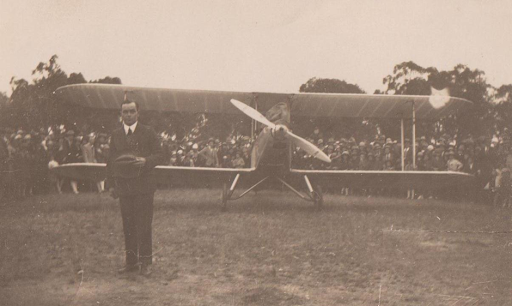 And here it is enhanced and colorized on MyHeritage: 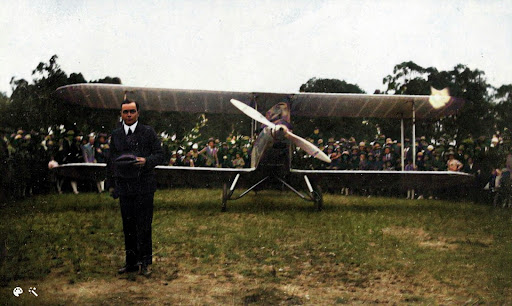 “My paternal grandmother, Jane Ingle Thompson nee Bone, took this photo,” writes Julie. “My family lived in Stanthorpe, Queensland, Australia, and my grandparents were present when Bert Hinkler landed in his Avro Avian G-EBOV on an open area on the McGregor Estate on June 13, 1928. The wings were folded back and the plane was wheeled down the main street to Pierpoint & Sons to be refueled. Crowds gathered to watch the occasion. Wasn’t  life so much simpler then?”

Julie’s paternal grandfather, Jack Thompson, also had a garage in Stanthrope called Thompson’s Garage — unfortunately, not the one Bert Hinkler’s plane was wheeled too. She explains that today, the McGregor Estate is part playgrounds and public tennis courts.

The photo was loaned to Julie by her aunt while she was researching family history.

Lou Daly from Washington State in the western U.S. shared two photos from her family albums. To the best of her knowledge, she is “the only person who knows that they even exist.”

The photos were during a dramatic period of history: 87 years ago, in August 1935.

The first photo captures the famed American aviator Wiley Post, while the other is of Will Rogers, an actor, comedian, vaudeville performer and social commentator.

Wiley Post, born in 1898, was the first aviator ever to fly solo around the world, in July 1933. He was also known for developing one of the first pressure space suits and discovering the jet stream.

Will Rogers, born in 1879, was one of the biggest stars of Hollywood and Broadway, played in more than 70 movies and wrote above 4,000 newspaper columns. During the 1930s, Rogers was the highest paid actor in Hollywood. An advocate of U.S. aviation expansion, he joined Post on several of his flights in order to write about them in his newspaper columns. 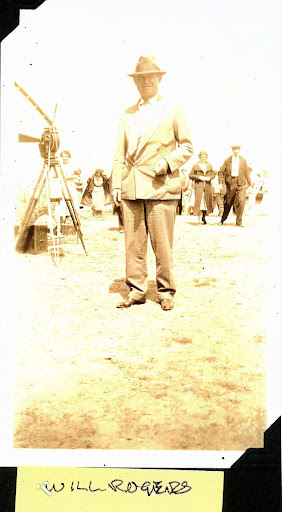 On August 15, 1935, while flying together in a Lockheed hybrid airplane, the two crashed into a lagoon next to Point Barrow, Alaska, soon after taking off.

According  to Lou, these pictures “were taken just before Rogers and Post’s fatal airplane crash in Alaska. They were taken by my ex-husband’s grandfather, Percy Daly, who was a friend of Wiley Post’s. I don’t think the photos have ever been seen outside of the family.”

Do you have any remarkable photos in your family like these — captured by family members during critical moments in history? We’d love to see them and hear the stories behind them! Fill out the form here to submit your photos and stories.