We are pleased to announce the addition of 10.7 million Austrian Roman Catholic church records in two new collections that cannot be found on other commercial websites. The first is an index of records from a variety of communities around Austria-Hungary as well as Eastern Europe, covering modern-day Austria, Hungary, the Czech Republic, Poland, and Germany. The second focuses on Vienna, the capital of Austria, and some surrounding areas. The collections include vital records — baptism, marriage, and burial records — covering a span of 4 centuries, from the 16th century to the 20th. The collections are invaluable for anyone seeking to learn more about their heritage from Austria and Eastern Europe.

The coverage of this collection includes records from modern-day Austria (including the historical territories of Lower Austria, Upper Austria, Styria, Tyrol, Salzburg, and Carinthia), Hungary, the Czech Republic (Bohemia and Moravia), Poland, and Germany. This collection does not include Vienna.

This collection of 3.8 million records contains an index of Roman Catholic Church baptisms, marriages, and burials from the city of Vienna, Austria and some surrounding areas. Records contain the full name of the individual, the date and place of the event (baptism, marriage, or burial), any comments, and various indicators about the records such as a book and page number. The location of the event normally includes the name of the parish as well as the district within Vienna.

The burial record of world-renowned composer Wolfgang Amadeus Mozart can be found in the Austria, Vienna Catholic Church Records Index, 1585–1918 collection. The record lists the date of burial; his age at death, 36; and his burial location, Sankt Stephan, in Vienna. 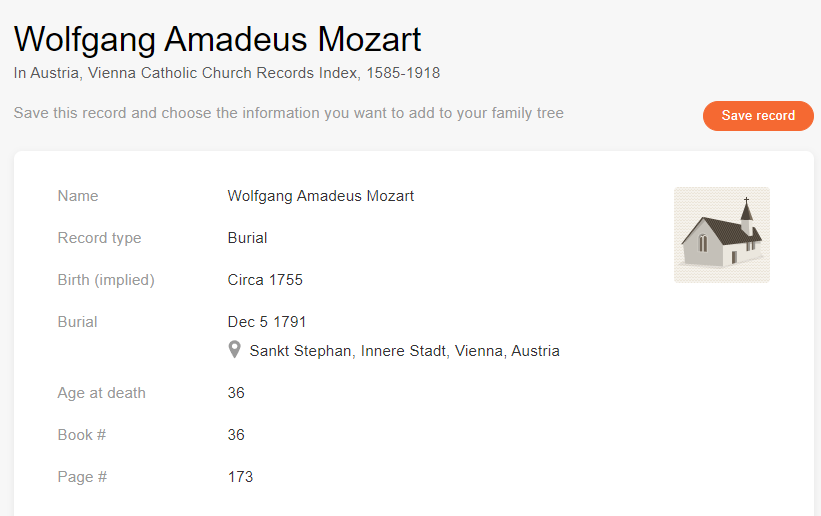 These two new collections are an important resource for anyone searching for more information on their ancestors from Austria and Eastern Europe.