We are pleased to announce the publication of three important Welsh historical record collections on MyHeritage: Wales, Parish Births and Baptisms; Wales, Parish Marriages and Banns; and Wales, Parish Deaths and Burials. The collections consist of 14.8 million indexed historical records and cover over 450 years of Welsh history. High quality scans of the original documents will be added very soon. These collections are some of the main sources of genealogical information in Wales before the 19th century, making them an invaluable resource for anyone researching their Welsh heritage.

Here are more details about the new Welsh collections:

In 1537, the Church of England mandated the keeping of parish registers of all births and baptisms, marriages, and deaths in Wales. For nearly three centuries these records were the only vital records documented in Wales. In 1837, civil registrations of births & baptisms, marriages, and deaths were required throughout all of England and Wales. These records are already on MyHeritage and can be found in our U.K. collections.

Unlike most countries where civil registrations replaced parish records, Wales parish records continue to be recorded. These collections contain records as recent as 2005, making the Wales Parish collections some of the longest spanning collections on MyHeritage.

Parish baptisms, marriages, and burials were all recorded in a single volume until 1774, at which point the law changed to require a separate marriage register and another one for marriage banns (proclamations of an intent to marry). Standardized forms for these registers appeared in 1812.

The amount of information in registers varies from parish to parish. Later records generally give more complete information than earlier ones. Some early parish registers are in Latin. A few very early registers are in Welsh or have occasional entries in Welsh. Local dialects may have affected the spelling of names or places.

The records may use the patronymic naming system. This system started in Wales in the 15th century and continued through the mid-18th century. In Wales, this usually involved adding ‘ab’ or ‘ap’ between the child’s first name and the father’s first name. For example, Dylan ap Lewis is Dylan son of Lewis.

The collections aren’t limited to members of the Church of England, and other religious denominations often registered life events with their local parish.

Children were usually baptized within a few weeks of birth.

Since some records show the mother listed without a surname, MyHeritage inferred her surname based on the husband’s surname, and made the record searchable by that name. The actual records were not modified, since we can’t be sure that this was indeed her surname, and so the surnames were not inserted into the records, to preserve their authenticity.

Occasionally, the ages of the couple may be listed as “full” rather than as a figure. This was a customary way of noting that they were over the required age of 21. If the bride or groom was under the age of 21, “with consent of parents” is noted in the record.

This collection consists of 3 million death records from parishes throughout Wales. Records contain the given name and surname of the deceased, age upon death, birth date, burial date, death date, mother’s name, father’s name, next of kin’s name (usually spouse), parish, and location.

Many notable figures from Welsh history appear in the collections. We’ve included a sample record from each of the three collections.

From the Wales, Parish Births and Baptisms collection is the baptism record of painter Augustus Edwin John, who was born in 1878, in Tenby, Pembrokeshire, a coastal town in South Wales. Though he lost his mother at just six years old, he and his older sister Gwendolyn Mary John were greatly influenced by their mother’s love of art. After leaving Tenby to study in London and then later Provence, Augustus earned accolades for his drawings and portraits. He was honored with a large showing at the Royal Academy of Arts in London in 1954. The marriage record of 1st Baron Merthyr William Thomas Lewis and Anne Rees is found in the Wales, Parish Marriages and Banns collection. William Lewis was born in Wales in 1837 to a middle-class family. In the late 1800’s he rose to prominence as a coal magnate and was awarded the title Baron Merthyr. A statue in his honor greets visitors at the entrance to Aberdare Park in South Wales. The burial record of prominent Welsh painter, Richard Wilson is found in the Wales, Parish Deaths and Burials collection. One of the founding members of the Royal Academy of Arts, Richard Wilson was famous for his picturesque landscape paintings. Trained as a portrait artist in London, he developed a love for landscape art while training abroad in Italy and brought that perspective back with him to the United Kingdom, which later served as an influence to such luminaries as J.M.W. Turner. 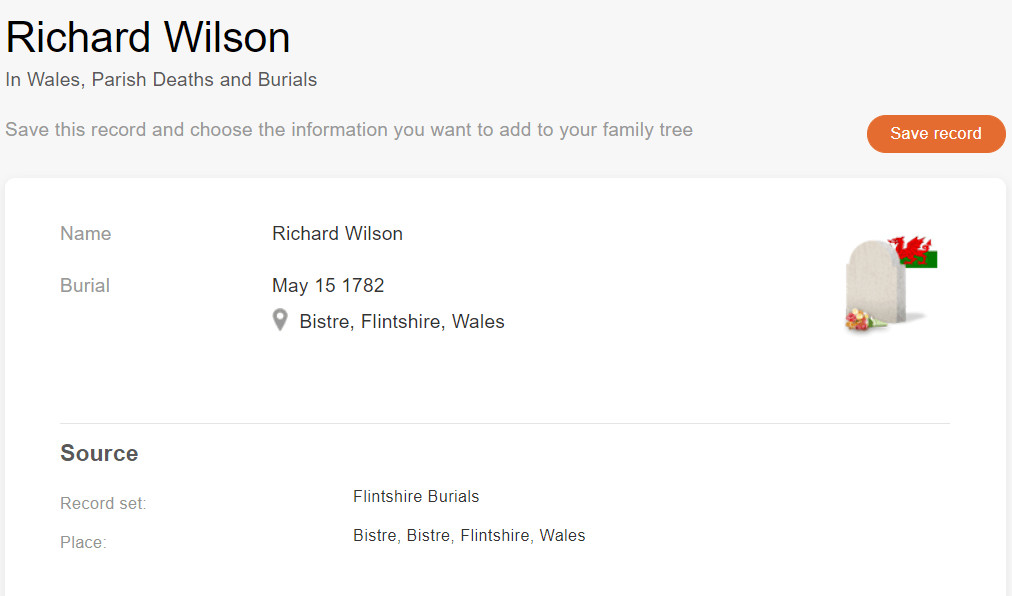 The new Wales Parish collections are an essential resource for anyone researching their Welsh roots during this time period. With the release of these collections, MyHeritage now offers 1.04 billion records from the U.K.

Searching the Wales Parish collections on MyHeritage is free. If you have a family tree on MyHeritage, our Record Matching technology will notify you automatically if records from these collections match your relatives. To view these records or to save records to your family tree, you’ll need a Data or Complete subscription.