Elisabeth Zetland, Researcher at MyHeritage, has been working on her father-in-law’s family history ever since she stumbled across a huge trunk full of old photos and documents at her in-laws’ house. She took a special interest in her husband’s paternal grandfather, Reuben Zetland, and the family he left behind in Russia. At first, her husband’s family knew very little about Reuben’s family in Russia — not even the exact spelling of his original family name, Tzitlionok (Цитлёнок). But with some research, Elisabeth began to piece together his story.

Rubin Tzitlionok (1895–1979) emigrated from Chernigov (then Imperial Russia, now Ukraine) to the U.S. at the age of 18 in 1913. Elisabeth knew that he left without a proper goodbye for his parents, because the tsarist police were after him for being part of a Zionist group. His father wanted him to report himself to the police, whom he believed he could bribe to release his son, but Rubin (who changed his name to Reuben later in life) was reluctant and decided to flee. Rubin Tzitlionok with his Zionist group in Chernigov

Upon arriving in the U.S., he joined his older sister Bella in Milwaukee, Wisconsin. A year later, two of his brothers, Schevel and Moshe, followed. Reuben left in 1917 to join the British Jewish Legion in Palestine, and his brother Moshe went with him. When returning to the U.S. after World War I, he entered through Ellis Island as Rubin Zetland. Click here to view MyHeritage’s Ellis Island passenger lists.

Elisabeth was able to establish that there were 5 siblings that had stayed behind in Russia: Dinya, Bluma, Zira, Volodya, and Zivia. She decided to track down the descendants of each of those siblings.

In 2017, Elisabeth found Zivia’s family. All she had to go on was her first name and a photo, but that was enough to connect with her great-granddaughter Anastasia, who had built a tree on Geni. Elisabeth learned from Anastasia that another sister, Zira, had 2 children who had both died childless.

Then, Elisabeth found the family of another sister, Bluma, in a MyHeritage family tree. These first two discoveries generated a lot of exchanges and excitement on both sides, and in April 2018, Elisabeth convinced her husband to travel to Moscow to meet his cousins. Aleksandr, Bluma’s grandson, hosted them in central Moscow. They discovered that Anastasia, Zivia’s great-granddaughter, lived only 2 streets away! Thanks to Elisabeth’s research, these families who had lost contact decades ago were reunited. 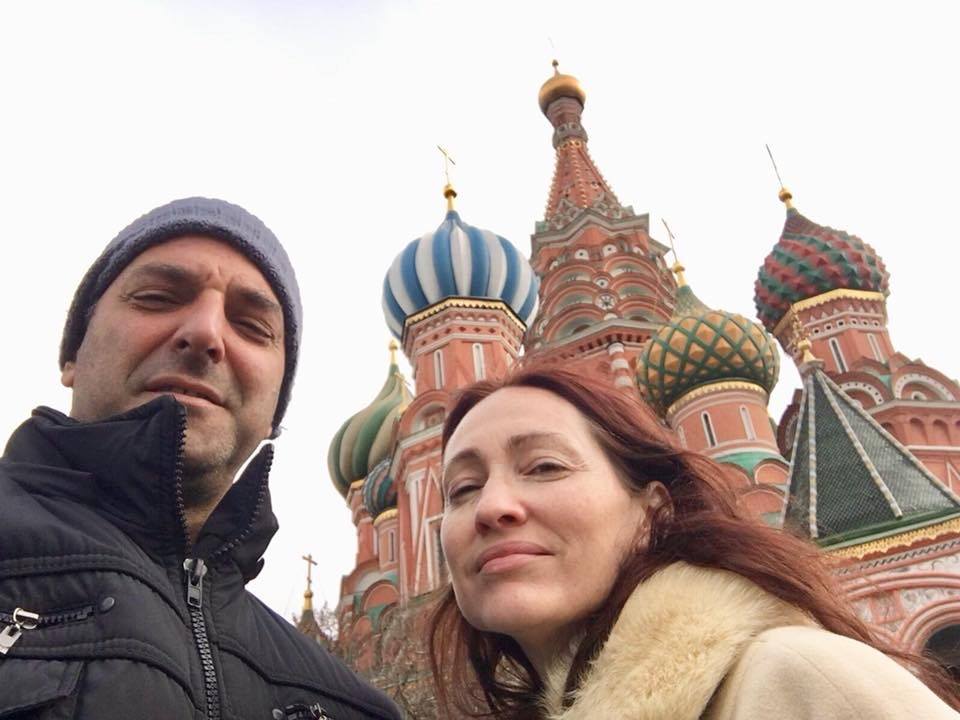 Elisabeth and her husband Jeremy in Moscow

3 siblings down, 2 to go. Elisabeth focused her next efforts on finding Volodya, and discovered that he had 2 sons and at least 1 granddaughter, and might have been the only sibling to stay in Chernigov. She found a gravestone on JewishGen that she was fairly confident was his, and was pretty sure that the “Vulf Tzitlenok” noted on a list from Yad Vashem of evacuated persons was him. She created a collage of 4 photos that she believed were all of Volodya. The only photo she was sure depicted him was the photo on the bottom left. Collage of images of Volodya

At this point she hit a bit of a brick wall and wasn’t sure how to proceed.

Then, one morning, she received a message from a new DNA match of her father-in-law’s. Masha from St. Petersburg (currently living in Hamburg, Germany) was a 1.6% match, and when she checked Elisabeth’s family tree, she spotted her great-grandfather Volodya! She immediately contacted her cousins, who had immigrated to New York in the 90s, to tell them about the discovery. When they had first arrived in the U.S., they had gone to Ellis Island to track down Reuben, but were unsuccessful. Elisabeth soon learned that Reuben had been a sort of mythical figure for Volodya’s family and had come up in conversation many times over the decades. Volodya’s granddaughter Lyudmila, who lives in Brooklyn now, told Elisabeth that Volodya used to tell the story of his young brother Reuben, who had to escape suddenly to the US because he was involved in a plot to assassinate the governor of Chernigov!

Elisabeth hasn’t been able to verify whether Reuben really was involved in such a plot. What is clear is that Volodya had a great deal of love and respect for his brother — so great that his descendants inherited that love through the stories about Reuben, even though they’d never met him.

Elisabeth’s work on finding Reuben’s family is not quite done: there is still Dinya to track down. Who knows what new DNA match, family tree, or record collection will lead her to the final piece of the puzzle?

If you still have missing puzzle pieces in your own family story, consider taking a MyHeritage DNA test like Elisabeth did. You never know what you might discover!