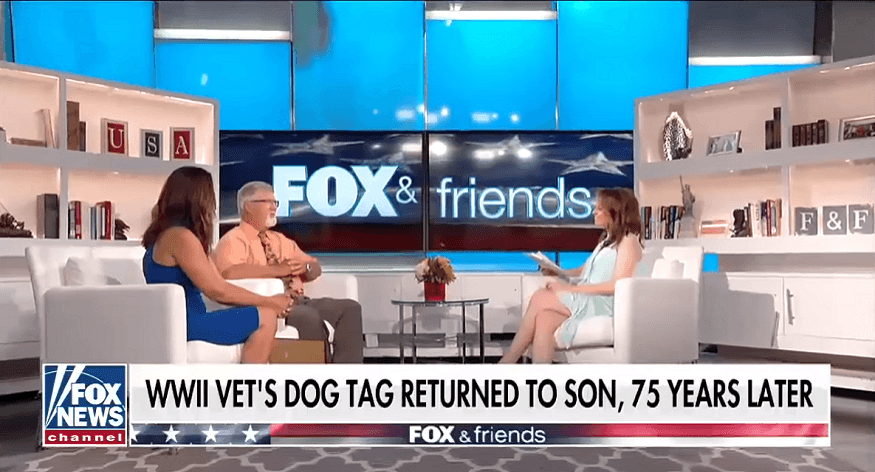 WWII veteran Marion Yates never discussed the war or what he went through with his family. His son Keith grew up not knowing much about his father’s service. So when Keith received a call out of the blue from the MyHeritage research team that his father’s dog tags from WWII had been recovered, he was blown away.

Friend of MyHeritage, Yvette Corporon, joined the Fox team to meet with the veteran’s son, Keith Yates, on Fox and Friends. Watch the interview here:

Marion grew up in Kentucky in a small town called Calhoun, where he enlisted in the US Army around the time of WWII. He was sent to Camp Sutton, South Carolina, and from there he went into service and became part of the 225th division as a Tech 5. Marion Yates during his army service

A Romanian gentleman named Vasile was searching for hidden treasure in the forests of Bari, Italy. As a hobby, Vasile liked to search the ground using a metal detector to see what he could find. Google Earth image of the forest in Bari, Italy where Vasile was searching

Vasile uncovered a dog tag with the name Marion on it. Thinking the tag had belonged to a female soldier, he set out to find the soldier’s family and return it to them. Vasile with the dog tag that he found

Vasile was unable to locate the family by himself, so he turned to the MyHeritage team for a helping hand. He shared a post on the MyHeritage Facebook page with information and a photo of the tag. That’s when the MyHeritage research team got down to work. They dug through almost 10 billion historical records in MyHeritage SuperSearch™ to locate Marion. What they discovered was that Marion was a male US soldier and that his son, Keith Yates, was alive and well and living in Kentucky.

When the MyHeritage research team located Keith, they couldn’t wait to get in touch with him. At first, their attempts to reach him were unsuccessful, but they persisted, confident that Keith would be thrilled to receive the tag. It was only when Keith’s wife Cindy convinced him to talk to MyHeritage that he finally sat down and listened.

After exchanging information about Marion, including discharge papers, Keith understood that everything matched up.

The MyHeritage team was able to give Keith this important heirloom from his father’s army service — a small relic of Marion’s experiences during his army years. It was an unforgettable moment for Keith and his family.