Register now to MyHeritage LIVE and get the Early Bird Discount!

And while MyHeritage LIVE 2019 is reason enough to book your flights this September, the city of Amsterdam is packed with fascinating historical sites and awe-inspiring attractions that earn it a place of honor on any genealogist’s must-visit list.

Founded in the 13th century as a fishing village, Amsterdam reached its golden age in the 17th century as one of the world’s leading cities for finance and the diamond trade. The 17th century was a tumultuous period with imperial Spain threatening to spread religious intolerance. Amsterdam was a safe haven for those fleeing poverty and persecution, such as Jews of Spanish and Portuguese background and Huguenots from France. The city’s rich history can be experienced through its beautiful neighborhoods, breathtaking architecture and monumental museums.

Here is our list of 11 top attractions to see in and around MyHeritage LIVE 2019: The Amsterdam City Archives is the largest city archive in the world. Its collection includes millions of maps, drawings, photos, written documents, and audio and film files. Even if you don’t have any Dutch family history, the archive is a must-see for history buffs, containing documents central to the history of the city. These include the police report from the theft of Anne Frank’s bicycle, which she mentions in her diary, and the burial records of Rembrandt. In World War II, Amsterdam was the home of Anne Frank, whose diary became one of the most well-known Holocaust memoirs. You can visit her hiding place and her original diary at the Anne Frank House — just one of many fascinating history museums in the city. Amsterdam’s beautiful canals are a testament to the city’s golden age. They were dug to manage the increasing population of the city and make traveling, commerce, and water management more efficient. Hop on a canal boat ride or just wander along them, taking in the picturesque sights of the quaint old buildings and bridges. Or, stop by any of the many restaurants, shops, or museums along the way. 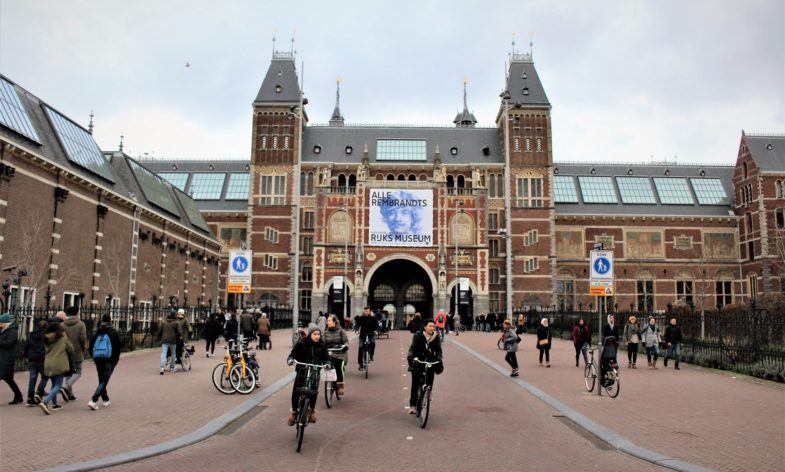 Cyclists in front of the Rijks Museum in Amsterdam

The Netherlands produced some of the most celebrated artists of all time, including Vermeer, Rembrandt, and Van Gogh. The Rijks Museum is the largest art museum in the country with 8,000 pieces from the years 1200–2000 on display, including some masterpieces by Rembrandt, Hals, and Vermeer.

The museum is also one of the few in the world that has a special passageway for bikes, which is a testament to its long-standing culture of cycling. Amsterdam has been ranked the number one city for cycling in the world, thanks to its well-developed bicycle infrastructure built in the 1970’s. The Van Gogh Museum contains the world’s largest collection of the artist’s work, including 200 paintings, 500 drawings, and even some of his correspondence. It’s located near the Rijksmuseum.

Tulips are the Netherlands’ national flower, and they are everywhere. September is the final month of the annual tulip display at Tulip Island in Vondelpark, just a 15-minute walk from the Rijksmuseum. You can also visit the Bloemenmarkt, the world’s only floating flower market, located on Singel in Amsterdam’s southern canal belt. As any self-respecting 1,000-year-old city would, Amsterdam boasts a range of architectural styles from various periods, including medieval, renaissance, and modern. Oude Kerk, is one such architectural gem. Built in 1213, Oude Kerk, “Old Church” in english, is the oldest standing building in Amsterdam. The centuries of renovations and architectural changes are a testament to this structure’s rich history. Oude Kerk’s roof is the largest medieval wooden vault in Europe and is renowned for its acoustics. Furthermore, the floor consists entirely of gravestones as the church was initially built on a cemetery. Amsterdam residents continued to be buried there until 1865. Walk back in time and explore the enchanting buildings and narrow alleyways of one of Amsterdam’s oldest neighborhoods. The Jordaan neighborhood was built in the 17th century to house the many immigrants flooding to the city from France, England, Spain, and Portugal, among others. Get lost in its numerous antique shops, art galleries, and restaurants and soak in that old-world charm. View of the Royal Palace in Dam Square

Dam Square is more than just a town square. It’s the site of the original dam from which Amsterdam got its name. Built on the Amstel River in 1270, the purpose of the dam was to connect the settlements on the banks. Today, you can visit the square to tour the notable buildings surrounding it, such as the Royal Palace, the National Monument, the New Church, and more.

10. The Windmills in Zaanse Schans We mentioned tulips… what about windmills? The Netherlands is famous for its historic use of windmills. You can visit some of them in Zaanse Schans: a historic neighborhood just outside Amsterdam, a short train ride away. It houses 8 historic windmills and 7 museums. De Waag on the Nieuwmarkt, Amsterdam

The Nieuwmarkt (Dutch for “new market”) is a historic square located in the center of the old city of Amsterdam. It has been active as a market since the 17th century. After enjoying the fresh produce available there daily, you can visit the Waag: a 15th-century building that was originally a gate and part of the wall that surrounded Amsterdam. It was later used as a weigh house, where various goods were weighed. Today the ground floor is a café and restaurant.

If you haven’t booked your tickets yet, now’s the best time to do so. September is hands-down the best time to travel to Amsterdam to take in all its outdoor pleasures. Temperatures are very pleasant — almost the same as in June.

You can still access our early bird discount when you register!

Which of these sites are you most excited to experience? Let us know in the comments below!