Holiday Traditions of 100 Years Ago Did your ancestors observe the same holiday traditions that you and your family keep today? Their traditions may have been rather different, based on the time and place where they lived.

A century ago, in 1918, Woodrow Wilson was President of the United States of America and became the first US President to travel to Europe while holding office. World War I raged on that year until November, when it finally ended. Earlier that year, there was a huge win for women’s suffrage in the UK when the Representation of the People Act gave most women over 30 the right to vote. The US Congress established time zones across America and approved daylight saving time, and a box of Kellog’s Corn Flakes cost just 8 cents!

In fall 1918, rules were issued to retailers by the Council of National Defense to save on coal and gasoline. Since manpower was required elsewhere, stores were not allowed to hire as many seasonal employees as needed to handle the holiday rush. After the war’s end, the first holiday season was a huge relief. Although many soldiers had not yet returned from the front lines, the political, cultural, economic, and social climate began changing drastically with the end of the war.

Here are some newspaper stories that we found in MyHeritage SuperSearch that demonstrate how holiday traditions of 1918 were impacted by those historical events.

“There will be no propaganda this year to curtail in the buying, or in anything that will make the holiday season of 1918, less than one long to be remembered” 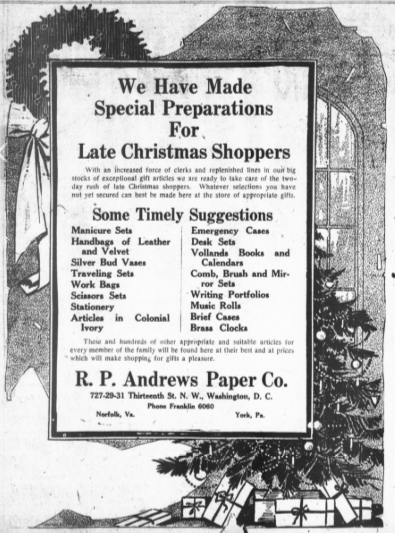 “Christmas, 1918, should be a joyous day. The was is ended – to the great comfort of mothers and fathers and wives and children. It will be a great day among the boys who are still in Europe.” “Mr. Wilson has insisted upon taking Christmas dinner with the troops and eating from a mess kit with the soldiers about him.”

“For a time it seemed that home-made Christmas candy must be only a remembered joy this year — then the ban on sugar was lifted, and amateur and champion cooks are already preparing to try their skill as confectioners.” “The festival of Chanukah, which will be celebrated in all Jewish homes for eight days beginning with Thursday evening, November 28, embodies the elements of the present world struggle.”

What are your family’s holiday traditions? Share them below for a chance to win a MyHeritage DNA kit! Learn more about our holiday competition here.

Happy Holidays to all!