“I can’t tell you what it means to finally meet my brother after 65 years.”

At MyHeritage, we regularly hear from our users about life-changing discoveries they have made about their families using our website. Today we share with you a truly exceptional story, and one that we had the privilege of taking part in as it unfolded. This is the story of two brothers separated as young children in post-World War II Europe. They hadn’t seen one another in 65 years — until MyHeritage reunited them. 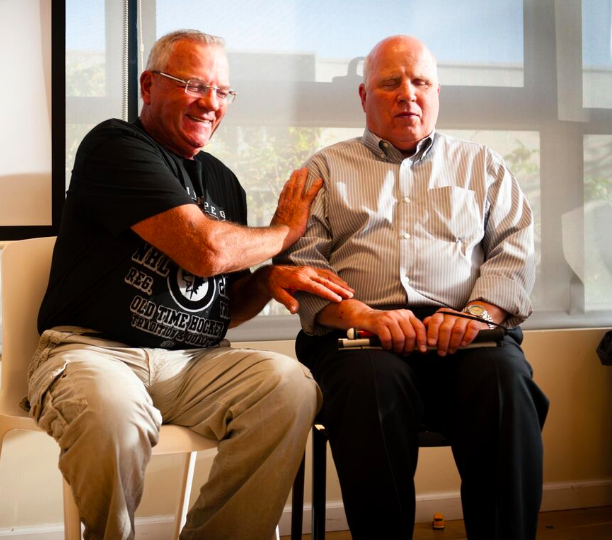 Long-lost brothers Izak and Shep meet up in MyHeritage HQ. (Click to view in full size)

Izak Szewelewicz was born in the displaced persons camp at Bergen-Belsen, Germany shortly after World War II. This was a tumultuous time in Europe, with masses of people who had lost their family members and homes scrambling to start over. Izak has no memories of his early years in the camp. He was sent to Israel for adoption in 1948, at the age of three, and raised by his adopting family. Izak’s biological mother, Aida, had meanwhile immigrated to Canada, and she later found and contacted Izak when he was an adolescent. They met several times and kept in touch, but she always refused to speak about the identity or fate of Izak’s father or anyone else from the family.

Just a few years ago, Izak received documents from the Bergen-Belsen archive that delivered a shocking revelation: he had had a brother named Shepsyl in the camp, as well as another relative. The records indicated that both relatives had emigrated to Canada, separately from his mother. Is Shepsyl still alive? Where might he be now? And who is this other relative? Could it be Izak’s father?

In 2013 Izak’s nephew, Alon Schwarz, reached out to MyHeritage and asked us to help him find Izak’s brother. Founder and CEO Gilad Japhet took a special interest in Izak’s mysterious story, and requested that our senior researcher and Head of Genealogy (UK), Laurence Harris, devote his time and expertise to try to locate Izak’s family and uncover what happened. Together with Alon, Laurence embarked on a relentless and truly international search through the archives at Bergen-Belson in Germany and Yad Vashem in Israel, Canadian and Israeli vital records, and online family trees.

Laurence’s search eventually led him to Melanie Shell, the only daughter of a blind Winnipeg man in his 60s named Shep Shell. Corresponding with Melanie, Laurence discovered that Shep’s name had been anglicized upon arrival in Canada; his original name was Szepsyl Szewelewicz, and Melanie confirmed that he had been born in a displaced persons camp in Germany after the War. All the pieces fit together. Izak’s brother had been found.

An emotional reunion between the brothers took place in Canada. Izak finally had the chance to get to know his younger brother, a visually-impaired Paralympic skier, cyclist, and marathon-runner. A few days later, they went to visit Aida. Shep met his mother for the very first time since he was a baby. Aida called him “Shepsyl’e” In March 2014, Shep and Izak came to visit the MyHeritage offices to thank the employees for their role in reuniting them. Izak and Shep at the MyHeritage event. On the left is Racheli, Izak's wife (Click to view in full size) “I can’t tell you what it means to finally meet my brother after 65 years and find that I also have a wonderful, large family as a bonus. [This is also] the fulfilment of my lifelong dream to find my birth mother… Finding Aida closes a circle for me and gives me peace of mind that I am not alone.”

Alon Schwarz has produced and directed a feature-length documentary about this story, named Aida’s Secrets. The film follows the family’s efforts to uncover their post-World War II history and captures the reunions between the two brothers and between Shep and his mother. Aida’s Secrets includes many twists and turns in the quest to uncover the history of the family, including the surprising results of a DNA test, and an amazing album the researchers discovered, showing life at the Bergen-Belsen DP camp right after the war as the survivors began rebuilding their lives. The film will have its world premiere at the Hot Docs Canadian International Documentary Festival in Toronto on May 3, 2016. Visit the film’s page on Facebook.

Reunions like this are the essence of MyHeritage. Although we develop tools and technologies for users to make discoveries for themselves (we are not a research company that does research for the users), we occasionally have the opportunity to utilize our expertise and resources to help out with humanitarian genealogical quests like this one; we always do this as volunteers without any fees or profit, even if we end up investing hundreds or thousands of hours. The end result is always worth it, as genealogy can often change lives for the better.