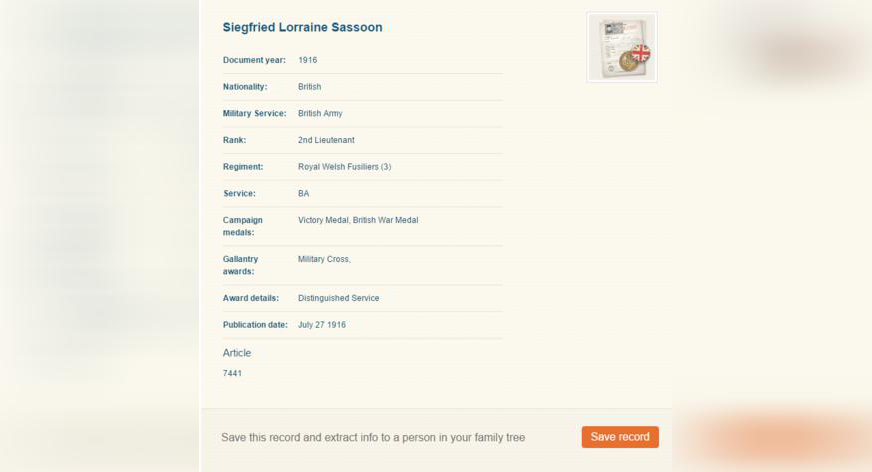 We’re happy to announce that over 1.8 million new records have been added to SuperSearch. The new collections include various UK Military collections.

These new records are valuable resources which provide insight into the lives of those who served in the UK Military, and their families. These records reveal more about our family heritage and the way our ancestors lived their lives. Excerpt from The London Gazette, 7 August 1917, announcing the appointment of Thomas Edward Laurence, Laurence of Arabia, as a Member of the Honourable Order of the Bath.

UK, Armed Forces Awards and Mentions in Dispatches from the London Gazette, 1914-1947: With over 800,000 records, the “Mentions in Dispatches” (MID) and awards of medals published for the British Armed Forces in the London Gazette is the largest collection. The records provide the name of soldier, initials, rank, regiment or unit, type of award or mention, and publication date. A soldier “mentioned in dispatches” was someone who had been named in a written report by a superior officer., which described the soldier’s meritorious action. Prior to 1979, a “mention of dispatches” was one of a few awards that could be awarded posthumously. Soldiers could be mentioned in dispatches multiple times, so there may be multiple entries for the same soldier within this database. Record from 7July 1916 of a Victory Medal for English poet, writer, and soldier Siegfried Sassoon.

UK, Army List, 1918: These lists include monthly and quarterly lists of individuals serving in the British Army in 1918. Since these were published at regular intervals, they are useful for creating a timeline of an individual’s military career. Information may include; name, rank, battalion, regiment, corps and post-nominal.

UK, Army List, 1936: The records include monthly and biannual lists of individuals serving in the British Army in 1936.

UK, Army List, 1939: The records include monthly and biannual lists of individuals serving in the British Army in 1939.

UK, Army List, 1942: The records include monthly and biannual lists of individuals serving in the British Army in 1942.

UK, Army List, 1952: The records include individuals serving in the British Army in 1952.

UK, Air Force List, 1940: The records include lists of individuals serving in the British Air Force in 1940. Since they were published at regular intervals, they are useful for creating a timeline of an individual’s military career. Information may include: name, initials, rank, branch of service and service number.

UK, Home Guard Officer Lists, 1939-1945: The records include nominal rolls of officers serving in the Home Guard – originally named the Local Defense Volunteers – during World War II. There were over 1,200 Home Guard units across the UK. They were organized according to area, normally covering towns or districts. Information generally includes: name, rank, area, division, sub-division, zone, town and awards.

UK, Royal Air Force (RAF) Formations List, 1918: The British Royal Air Force was formed on 1 April 1918 with the merger of the Royal Flying Corps and the Royal Naval Air Service, previously part of the British Army and the Royal Navy respectively. This is a complete list of everyone serving in the RAF on the day of its inception. Information includes: name, rank, number, date of entering service, trade classification and rate of pay.

Imperial Prisoners of War Held In Italy, 1943: The records include lists of members of the Allied Forces who were held by the Italians in 1943, such as individuals reported by Italian or Red Cross sources as being held prisoner by Italian hands, but excluding those known to have died in Italian hands, and individuals who died as prisoners of war while at sea in 1942. This collection comes from The National Archives WO 392/21. Information includes name, initials, rank service number, regiment/corps and final Italian camp location.

British Jewry Book of Honour, 1914-1918: This book, originally published in 1922, documents the service of 50,000 Jews in the British and Empire Forces during World War I. In addition to a nominal roll of Jews who served in the military, it includes a Roll of Honour of the Dead, records of honours and awards of military crosses, distinguished conduct medals, and memorials of fallen servicemen. Information includes: name, rank, number, battalion, regiment and medals awarded.

British Red Cross and Order of St John, Enquiry List, 1917: During World War I, the British Red Cross and Order of St John worked together, forming the Joint War Committee. One of its many activities included establishing the missing and wounded inquiry service. This list contains lists of wounded or missing British, Australian, Canadian and South African personnel about whom inquiries were made. It also covers enquiries for death and burial information of individuals killed in action. Information includes: name, initial, regimental number, regiment, battalion, division, date reported missing and rank.

Our Record Matching technology ensures that you will receive a notification if any record in our database matches a person in your family tree on MyHeritage. Matches can be confirmed and new information can be extracted directly to relevant family tree profiles, using the extract information feature. If a record contains information about a relative not previously known, add that person to your tree directly from the record.

Were your ancestors among the brave men and women who fought or served their country? Learn more about them by searching hundreds of thousands military records.

We look forward to hearing about your exciting discoveries.